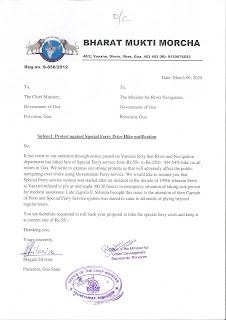 To,
The Minister for River Navigation,
Government of Goa
Porvorim, Goa

It has come to our attention through notice pasted on Vanxim ferry that River and Navigation department has hiked fare of Special Ferry service from Rs.55/- to Rs.250/-: 454.54% hike on all routes in Goa. We write to express our strong protests as that will adversely affect the public navigating over rivers using Government Ferry service.We would like to remind you that Special Ferry service system was started after an incident in the decade of 1990s wherein Ferry at Vanxim refused to ply at mid-night (00.30 hours) in emergency situation of taking sick person for medical assistance. Late Ligorio F. Silveira brought this issue to the attention of then Captain of Ports and Special Ferry Service system was stared to cater to all needs of plying beyond regular hours.

You are therefore requested to roll back your proposal to hike the special ferry costs and keep it at current rate of Rs.55/-.

Objections to the Blue Economy assault on Goa’s rivers

Subject: Objections to the Blue Economy assault on Goa’s rivers

It has come to our attention from the reports in media that Goa Government through your office is in the process of launching major assault on Goa’s rivers by setting up Jetties in various parts of Goa without holding Public hearing under the pretext that they are floating Jetties. It has also come to our attention that your office is all set to launch another major assault on Goas rivers by initiating dredging of various rivers of Goa like Chapora, Mandovi, Sal, Cumbharjua and Zuari without holding Public Hearings for the same.

Because of irresponsible attitude of your office barges has already created siltation of Goa’s major rivers like Mandovi, Zuari and Cumbharjua and recorded in the minutes of Goa State Pollution Board first meeting held on October 05th 1988 destroying precious marine ecology of these rivers and still remains in a same state. Your office carried on EIA of Chapora river but why is it not shared with Public?

Dredging is a major assault on marine life and your office is not bothered about it as if no one in your office is eating fish nor your office is bothered about hundreds of peoples engaged in fishing activities in Goa’s rivers. Dredging for Shipping purposes are known to create several problems such as Air and water pollution, sea floor erosion, wave and current regime alterations, introduction of invasive species, underwater noise pollution, land use change, water front congestion, health and labour issues and number of other ecologically destabilizing practices, environmental injustice, unequal power relations and social conflicts. Dredging of Mandovi river by Champions island has damaged marine ecology as informed by local fishermen from Diwar island and several marine species has disappeared.

Your decisions to set up Jetties and dredging of rivers is in violation of Voluntary Guidelines for Securing Sustainable Small-Scale Fisheries in the context of Food Security and Poverty Eradication (SSF Guidelines) India is signatory to SSF Guidelines and has committed to their enforcement via Article 54 of the National Marine Fisheries Policy 2017. It is also violation of Sustainable Development Goals (SDG): 14 Life under water. Government widened roads to make them six land and destroyed several paddy field and people dependent upon the same. Now your office is determined to destroy livelihood of several more fisher people by destroying marine ecology to promote shipping industry. Shame!

Your are therefore requested to immediately respect Goa’s rivers and its marine ecology, stay away from launching assaults in the form of construction Jetties and Dredging of rivers for Shipping purpose in Goa. Destroying Goa’s rivers by your office will only aggravate situation of hunger that currently stands at 7000 deaths per day as per community kitchen case proceedings in Supreme Court of India.

Posted by Bharat Mukti Morcha at 04:25 No comments:

Date: February 27, 2020
To,
The Director,
Department of Mines and Geology,
Panjim, Goa

This is to bring to your attention illegal operation of stone quarry at Colomba, Sanguem near the Hiralal Khodidas mine during night and early hours of the day. This activity is badly affecting nearby paddy fields cultivated by Scheduled Tribes People namely Devki Katu Velip, Tulsidas Velip, Rajani Velip and their family members. In rainy season the muddy water from the stone quarry also likely to flow in paddy fields as well as in Kushavati river destroying marine ecology and fishing.

For further directions to the site of this illegal quarry kindly contact Motesh Antao on his mobile: 9168206872. Kindly act.

Posted by Bharat Mukti Morcha at 04:22 No comments:

To,
The Director,
Directorate of Fisheries,
Panjim, Goa
To,
Superintendent of Police (Coastal Security)
Panjim, Goa

Subject: Law and Order problem due to Illegal Trawler fishing in Zuari river

Kindly attend to the ongoing rampant illegal trawler fishing in Zuari river from Sao Jacinto Island upto Siridao coast. This fishing using destructive fishing gears (trawl nets) has began on January 16, 2020 (Goa Opinion Poll Day and Feast of St. Joseph Vaz) during day and night. Several telephonic messages complaining against trawlers were conveyed at the Fisheries Control Room by many fishermen from Odxel, Cacra, Nauxim, Bambolim and Siridao.  Some calls were relayed to Coastal Security Police Station at Harbour for action by Fisheries department. However it has been observed that trawlers has continued to carry on illegal and destructive fishing within any respect to law and order. Yesterday afternoon (12.15 pm) over 16 trawlers and (05.30 pm) 18 trawlers was seen carrying on illegal fishing in Zuari from St. Jacinto Island upto Siridao-Agassaim destroying river bed as well as livelihood of small scale fishers of Zuari river.
Goa’s State laws are stringent against illegal and destructive fishing trawler practices within 5 kms from the coastline and inside rivers. However enforcement of these laws is absent or pathetic due to lack of commitment from your office even though your salaries are paid by Public. The irresponsibility from your office has led violation of Goa State fisheries Laws, violation of aims and objectives of Coastal Security Police, violation of Article 5.16 of Voluntary Guidelines for Securing Sustainable Small-Scale Fisheries in the context of Food Security and Poverty Eradication (SSF Guidelines), violation of Article 6.18 of Code of Conduct for Responsible Fisheries (CCRF). India is signatory to SSF Guidelines, CCRF and has committed to their enforcement via Articles 53 & 54 of the National Marine Fisheries Policy 2017. It is also violation of Sustainable Development Goals (SDG): 14 Life under water. Your office has ignored these so far and it is a serious public concern and disastrous consequences in Zuari river.
This situation has led to the increasing public suspicions that Fisheries department and Coastal Security Police is actually promoting destructive fishing practices such as Trawling in Zuari River for the reasons best known to you. Fisheries department has even awarded those responsible for destructive trawling with LED lights during ‘Aqua Goa’ mega fish festival 2020 held on February 13th-15th at Panjim.
You are called upon to (1) carry on 24 hours surveillance of Zuari river from Odxel coast and permanently stop further illegalities by trawlers. (2) Assess damage done to marine ecology due to trawling in Zuari and recovers damages from trawler owners. (3) Compulsorily install GPS transponders on all trawlers in Goa so to make them visible online in real time at Global Fishing Watch. (4) Withdraw above mentioned award given to those engage in destructive fishing.

Posted by Bharat Mukti Morcha at 04:18 No comments:

To,
Director,
Department of Mines and Geology,
Panjim, Goa

This is to request your urgent attention to take action against ongoing illegal sand mining going on by use of canoes in Mndovi river opposite Santus Christus Church, Vanxim island. Extracted sand is transported via Trucks from Vanxim in a Ferry boat. We have received information that police officers attached to Old Goa Police station are involved in this illegal sand extraction. This is the reason for continues sand extraction in spite of High Court order against the same.

Kindly act and stop the above mentioned activity of sand extraction that is destroying marine ecology and fishing activities in Mandovi river.

Posted by Bharat Mukti Morcha at 04:17 No comments:

It has come to our attention through media reports that your office is proposing to hike fare of Special Ferry service from Rs.55/- to Rs.250/-. We write to express our strong protests as that will adversely affect the public navigating over rivers using Government Ferry service. We would like to remind you that Special Ferry service system was started after an incident in the decade of 1990s wherein Ferry at Vanxim refused to ply at mid-night (00.30 hours) in emergency situation of taking sick person for medical assistance. Late Ligorio F. Silveira brought this issue to the attention of then Captain of Ports and Special Ferry Service system was stared to cater to these needs of plying beyond regular hours.

You are therefore requested to withdraw your proposal to hike the special ferry costs and keep it at current rate of Rs.55/-.

Posted by Bharat Mukti Morcha at 04:15 No comments:

Discussions in and around a dusty Foot Film titled ‘The Sea of Change: Traditional Fish workers’ perception of Climate Change’

Sebastiao  Anthony Rodrigues
Doctoral candidate at Department of Humanities and Social Sciences, Birla Institute of Technology and Sciences (BITS), Pilani – Goa Campus, Zuarinagar, Goa
Abstract
This paper attempts to discuss and critically reflect on the myriad of issues thrown up by the video documentary The Sea of Change: Traditional Fish workers’ perception of Climate Change. The crisis emerging from the Global issue of Climate is affecting coastal areas of India. Melting of Glaciers of Antarctica led to ongoing rise of Sea Level. This gradual rise has affected coastal people specially the traditional fisher people in most direct manner. The video documentary has attempted to locate this alarming situation in the complex situation of fisher people already in the vulnerable position due to various prevailing existing factors like industrial fishing, sand mining, industrial pollution etc. The film has been termed as ‘dusty foot film’ by its producers ‘International Collective in Support of Fishworkers’. The film covers three important locations where the focus is located: Andhra Coast, Pondicherry Coast on the Eastern shoreline of India and Mumbai Coast on the Western shoreline. The film interspersed expert interviews with the fisher people in these three locations. While experts are given their due recognition of identity in the form of names and designations the Fishworkers are denied the same except on one case of ‘Simon’ from Mumbai coast. Is this ethical way of supporting the traditional Fishworkers? The film further arrives at the conclusion that even though the Climate Change is destined to negatively affect traditional fisher people they are completely out of State policy framework to put in place mechanism to tackle the same. This is the reason perceptions of climate change are sort for and presented. Paper presents pointers from Goa Coast with sporadic contextualization. This is done in order to dig out the relevance of this film for the traditional fishermen in Goa and also to further increase support base to traditional fisher people in India.