Pictures from mining protest in Caurem 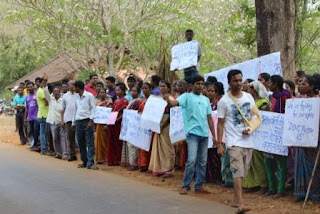 Bharat Mukti Morcha (BMM) supports current protests against mining in Caurem in Quepem Taluka of Goa. These pictures are of April 09, 2016. We share here the Press Release from Ravindra Velip about the day's protest interspersing in-between pictures with additional comments from BMM. 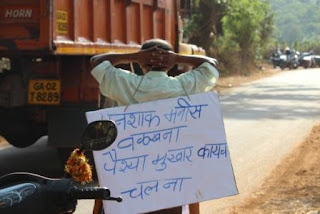 It was a peaceful protest by Caurem tribals by standing on the roadside, but their slogans written on placards were louder enough to realise that peace does not exist in this remote mining village of Quepem taluka. 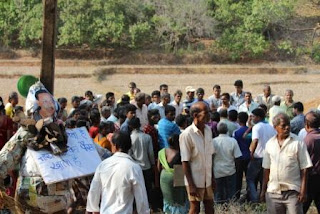 They protested peacefully standing on the roadside while mining trucks were illegally transporting the e-auctioned iron ore from Fomento mines. 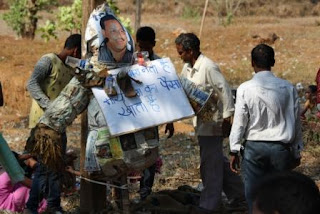 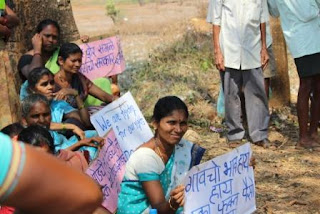 Women squatting on site with placards of protests 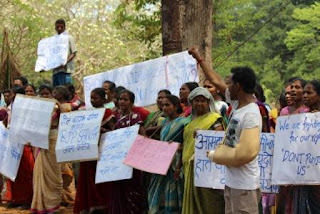 It was a unique scene with police force deployed at the mining lease while villagers were standing on the road, holding placards in their hands. 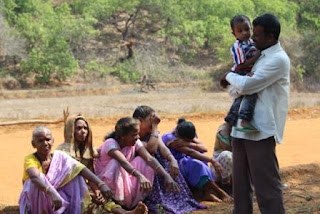 
It was a  peaceful protest, to reach out their feelings to the authorities, with a hope they would listen and act against the illegal transportation. 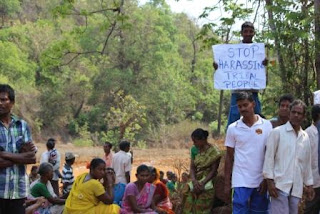 The message is clear: Stop harassing tribal people. Harassment is from Bamon Avadoot Timblo. Bamons have historically looted tribal people in India. This loot continues and Cavrem is one more example in Goa. Essentially this is an issue as much of race as it is of economics. 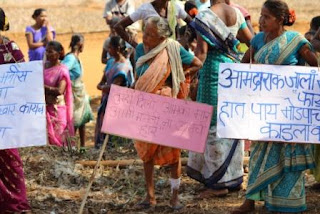 Though she is old at protest her spirit is young and determination to fight is intense. 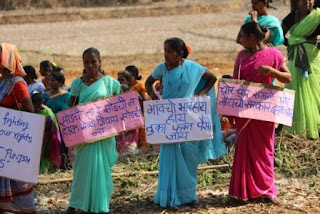 We are determined to fight to the victory! 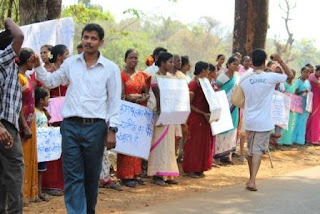 They have demanded the following:-

1. To stop immediately illegal transportation that is taking place.


2. inventory of the iron ore before transporting it, claiming that the quantity of the ore is more than double of what is being measured by the mines department.


4. Suspend PI Pravin Gawas ans PSI Vinayak Patil of Quepem Police station and inquire into the assault of Tribal villagers when they were custody of Quepem police on 06.04.2016


5. Immediately register 'The Sadhana Multipurpose co-op society' and allow to transport the e-auctioned ore through the society.

Because they stopped ore transportation before inventory, the police arrested them thrice while Ravindra was blind-folded and beaten up in a judicial lock-up, fracturing his hand.
Posted by Bharat Mukti Morcha at 01:04