Is IOP Confusion as vast and deep as Indian Ocean ? 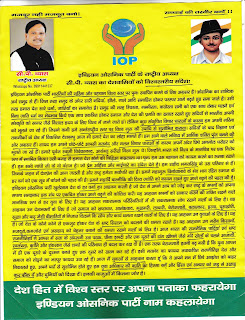 On 12th June 2017 from 6.00 pm to 8.00 pm we had a visit from three People Asha Naik, Datraraj Kerker and Goa State Youth Vice President of Indian Oceanic Party Rama Shetkar. They had come to tell us to join their newly formed Political Party. After asking them about the Party ideology they gave us one page in Hindi containing global message of its National President C.P. Vyas. They did not give us the Constitution of the Party nor Manifesto of the Party. The speech though emotive ideologically is inclined towards Brahmanism. We present some points in this direction from the Vyas Global message from the perspective of mulnivasis.

No mention of Dr. Bhimrao Ambedkar

There is no mention of Dr. Bhimrao Ambedkar as one of the inspiring figure to the Party. There is a suspicion that this Party is tilted towards Brahmanism. This is significant considering that Ambedkar along with his predecessors Shahu Maharaj, Jyotirao Phooley and Savitribai Phooley fought for freedom from Brahmins with support from British. While Nehru-Gandhi-Gokhale after fought British to attain freedom for Brahmins after they failed to get share in rule.

Valmiki, the divine light of the Party?

Party thinks of non discrimination on Jatis and Religions. Jatis are different from Varnas which are four: Brahmin, Kshatriya, Vyasha and Shudra. Jatis are several splits orchestrated by Brahmins amongst Shudra to keep them perennially divided. They feel insecure and hence they keep them divided. Shudras is Sanskrit word for ‘Slaves’. Persian word for slave is ‘Hindu’. The word Hindusthan means land of slaves.

At the same time text of this speech mentions that Vyas is moving ahead in divine light of Maharshi Valmiki. Valmiki was a State Poet in the Kingdom of Pushya Mitra Sung established after Brahmins destroyed revolution by murder of King Brudatt and established Ayodhya as headquarters of his counter-revolutionary kingdom. Valmiki wrote literary works ‘Ramayana’ in which he defended Varna system. Rama is written as dripping molten lead in the ears of studious non-brahmin native Shambook at the instigation of Brahmins; for Shambook was studying and Brahmins kingdom as per manusmriti denies education to Shudras. Rama is thus presented in Ramayana as defender of Bamon Raj. Now when C.P. Vyas is moving in this ‘divine’ light that defends Bamon Raj should natives of India join hands with it?

Location of roots of Violence and Injustice

Is Gandhi messenger of non-Violence?

For Vyas one of the inspirations is Gandhi and he wants to convince us that we are belonging to his vanvs. Vyas describes Gandhi as a messenger of Love, non-violence and brotherhood. This is surprising though popular notion peddled though Vyas speech. Vyas overlooks the fact that it was Gandhi who gave order for Violence in 1942: Do or Die! And amount of Violence triggered against British officials at all levels was remarkable. This violence created such huge damage that British in just a half decade from carried on Transfer of Power to Brahmins, and packed off from India.

Along with Gandhi another inspiration listed with picture is of Bhagat Singh for the nationalistic reasons. We wonder how Gandhi and Bhagat Singh can be joint inspirations for Vyas. Gandhi never defended Bhagat Singh in his acts and in fact opposed him to such an extend that Gandhi stayed silent as Bhagat Singh was hanged Lahore Jail in today’s Pakistan. Bhagat Singh wrote a famous book “Why I am an Atheist” and was led to commit violent bombing of the Assembly in British India even though there were no casualties.

Swami Vivekanand, Freemason is another inspiration for Vyas as he belied that he was world teacher. There is very little discussion or information shared in the speech on Vivekanand’s degree in Freemasonry. We wonder why.

Aryabhatta, a product of Revolution of Gautam Buddha

Aryabatta is another listed as inspiring world teacher. Aryabatta was a product of vibrant University system in Ancient India that came up after Brahmanism and rule of Manusmriti was overthrown by massive movements led by Gautama Mahavira and Gautama Buddhas. Science was research was major gift of Buddha’s revolution in India that led to a period when Maurya Empire ruled. Several Universities pioneering scientific temper rose up : Taxasheela, Vikramsheela and Nalanda are three renowned examples. Aryabatta who discovered zero was a product of this system of education. It was during this time India was known as Golden Bird. This system perished after the Brahmins re-established their rule in the form of Pushamitra Sungh. Bikkus were massacred all over India. University system that attracted scholars from all over the world was set on fire and was left burning for several months. If Aryabatta had to rise up again in India then the rule of Shudras has to be established again. For this Vyas has closed mind at least visible from his printed message in Hindi. Jyotibha Phule, Periyar, Shahu Maharaja, Ambedkar are not amongst those inspiring Vyas. Entire orientation of Vyas is a variant of Brahmanism. We wonder: why?

Vinobha Bhave is another figure mentioned as inspiring Vyas to view society together. This must be reflected upon as Bhave led Bhoodan movement in India as a response to radical movement advocating land reforms in India. He allegedly convinced Zamindars to give away mostly unproductive, uncultivable lands that they had captured over the years to the poor politically conscious masses. Bhave protected interest of Brahmins from en mass confiscation of their land by poor shudra peasants.

Cost of India as Economic Power

Do nation dream or groups dream?

Vyas speaks of Dream of the Nation. One must ask him to list out what he considers as ‘dreams of the nation’. What is the dream of nation in current age of Anthropocene for the planet earth? Earth dreams of shut down of all the industries of the world. Who dreams on behalf of the nation?

Call to the nationalist

Vyas gives out a call to those nationalists with wish and capacity to free society of corruption, terrorism, starvation, hopelessness, unemployment, rapes, murders, intrusion, draught and floods. All these are products of rule of Congress and BJP, the two parties with their alliances under control of Brahmins in India. Brahmins now realized that both these Parties are discredited and they would not be able to manipulate EVMs non-stop to perpetuate their rule though these two Parties and allied parties. Hence new Parties are being floated. AAP is one of them and this Indian Oceanic Party has sufficient indicators in the global message of C.P.Vyas, it follow the same path. He is trying to cultivate Indian Nationalism by carefully protecting those responsible for sabotage of Indian nation over the centuries. Or else just refer to Manusmriti, a book of Brahmanical supremacy that Rama in Ramayana defends.

Vyas for nation of Brahmin Supremacy?

When Vyas himself adores Ramayana that protects and defends Brahmanical supremacy how do Vyas expect everyone to come together on one platform without Vyas renouncing divine path of Maharshi Valmiki?

Is Goa a nation?

One Goa centric point that must be made here as Vyas has come out with global message to Indians. Global Status of Goa as per United Nations Organizations is that Goa is a Colony of India. It was due to Veto power exercised by USSR on the night of December 18, 1961 that defeated UN condemnation of Invasion of Goa by India via its resolution 988. So officially Goa is part of India due to Veto power of USSR. Vyas has not made any comments on this in his message in Hindi circulated in Goa. Should India be allowed to forget this? Should Goa forget this? Should anyone forget this? No!

Indian Oceanic Party is confused in their orientation. Their broad orientation is towards strengthening o Bamon Raj. BMM disagrees with Party position in completion. Its yellow pamphlet in Hindi raises more questions that needs answers even though slogans are catchy and pitches for Truth: "Sacchayee ki tasveer bano" (Be a picture of truth) and "Majboor nahi majbooth bano" (Be strong rather than miserable). This criticism is written to seek truth for Truth sets us free. Truth is revealed through questions. Perhaps there is too much confusion as vast and deep as Indian Ocean. Lets await for a written response from Indian Ocean Party on its theory presented on yellow paper we have shared here as we received it. We are sure Bhagat Singh whose picture is printed on top of the pamphlet would have raised these questions and even perhaps more. Bhagat Singh was fierce critic of religion and even wrote a book "Why I am an Atheist?" Surely Bhagat Singh would instantly object to Maharshi Valmiki providing divine light to the IOP President. To print Bhagat Singh's picture on this pamphlet amounts to hijacking of Bhagat Singh's thought. Only those who do not suffer from lack of goodwill and lack of intellectual bankruptcy will talk this truth out which Vyas and leaders of IOP in India and Goa may like. Yet for the reason of upholding of truth we speak out forthrightly. This is contribution from BMM to Goa and India as well.
Posted by Bharat Mukti Morcha at 02:06