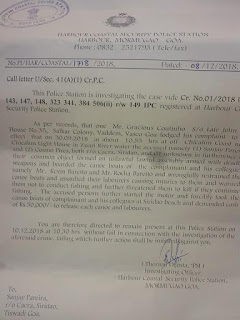 International Human Rights Day 2018 will witness latest attempt to criminalize dissent and protests on the banks of Zuari river. Two people Sanjay Pereira of Cacra village and Cosme Pires of Siridao village engage in fishing activities in Zuari river are called at the Coastal Security Police Station at Harbour Vasco at 10.30 am by PSI Therron D’Costa for investigation based on complaint filed by Gracious Coutinho of H.No. 35, Salkar Colony, Vaddem, Vasco. Case Cr. No. 01/2018 has been registered against both them under sections 143, 147, 148, 323, 341,384, 506 (ii) r/w 149. These two are charged with boarding the boat of Gracious Coutinho and his two colleagues Kevin Barretto and Rocha Barreto with deadly weapons and taking over the boat at 10.55 hours from Zuari river off Chicalim Coast near Chicalim Light House, then taken the boats to Siridao coast and demanded cash of Rs.50,000/- to release the canoes and labourers.

Having followed up the Zuari river conflicts closely for the past four years and verifying ground reality my observations are as under:

1.       Neither Cosme Pires nor Sanjay Pereira was in the river Zuari to commit the offenses as charged in a complaint.
2.       Three boats claimed to have brought to the shores of Siridao in a complaint were using purse seine fishing nets banned for use within 5 kms from the shore and in rivers.
3.       There are number of earlier incidents of this type wherein canoes using purse seine fishing nets and trawlers has been captured and brought the shore by several local people. Trawlers as well as purse seine fishing nets used by canoes are illegal ab initio in Zuari river.
4.       In none of these incidents at River local people are known to have used deadly weapons.
5.       Then power to capture fishing boats indulging in illegal fishing is with Goa fisheries department and power stop illegal fishing is vested with Coastal Security Police. There are several complaints pending before both these authorities but due to the acts of omission they have refrained from acting in the cases of rampant illegal fishing in Zuari river.
6.       There has been several meetings to discuss the measures to stop illegal fishing in Zuari river but has been sabotaged in their implementation. For past several patrol boat of fisheries department as well as coastal security police vanished from their duties. No one knows as to where the staff of Fisheries department patrol boat is posted currently leaving the boat tied up at the Panjim Jetty.
7.       There is well co-ordinated, well oiled nexus of those indulging in illegal fishing and the police of coastal security observed in the past. Normal procedure followed was to keep the telephone line of Harbour Police Station, Vasco in defective state so that public is prevented from contacting and complaining. In fact I had question the police publicly at the meeting held on 11/10/2018 at 3.00 pm at Conference Hall of the Goa Directorate of Fisheries in the presence of several people including PSI Therron D’Costa who blew up his tempers at me saying that I have no right to question as it is a technical matter! Yes, technical faults are caused to encourage illegal fishing in Zuari.
8.       Frustration of local communities of non-responsiveness of these two authorities to effectively crackdown on illegal fishing has led to constant conflicts in Zuari river leading to the capture of boats indulging in illegal fishing.
9.       Why call letter of PSI Therron D’Costa failed to record that Gracious Coutinho and his two colleagues Kevin Barretto and Rocha Barretto themselves were indulging in illegal fishing?
10.   It is recorded in the minutes of the fisheries department meeting held on 11/10/2018 that despite written communication of invitation Old Cross Fishing Cannoe owners cooperative Society Ltd, Goencho Ramponkarancho Ekvott, Baina Ramponkar & Fishing Canoe Owners Society has not participated in the meeting called to discuss illegal fishing in Zuari. Some of these organizations has given written memorandum to Goa Fisheries Department to suspend fishing permission of those fishing boats indulging in illegal purse seine fishing and were caught in similar way by people in Malvan Coast in Maharashtra earlier this year.
11.   The intervention of Coastal Security Police at the 11/10/2018 meeting at Fisheries department made it clear that they operate based on dictates of politicians such as ex-revenue Minister of Goa Jose Philip D’Souza who is never known to have defended traditional fishermen of Zuari river.
12.   Article 51-A (g) of the Constitution of India makes it is clear that it is a duty of every citizen of India to protect rivers. Duty to protect of fidelity to river sustainability, Duty not to cause harm, Duty to defend river from being harmed and Duty to Restorative Justice. Zuari river has been plundered by purse seine fishing boats as well as trawlers for four years now.
13.   Sanjay Pereira and Cosme Pires are not film stars with glamour around but they are heroes who defend Ecology, uphold Environmental Ethics and no attempt criminalize their activities will be taken lightly. We will not be intellectually neutral. We have taken stand already against illegal fishing by purse seine boats as well trawler fishing in Zuari river; and now if the Coastal Security Police attempts to criminalize the legitimate concerns of livelihood issues and ecological sustainability of Zuari river, we will be failing in our duty if we do no criticize this evil.
14.   The damage that purse seine fishing does to the Zuari river has already been discussed and well recorded in the minutes of 11/10/2018 at Directorate of Fisheries where in PSI Therron D’Costa himself was present. St. Andre MLA Fransisco Silveira, Siridao Parish Priest Fr. Valeriano Vaz, Bharat Mukti Morcha Goa State President Maggie Silveira explanations has been recorded in minutes. “Fr. Valeriano Vaz, Parish Priest of Siridao explained as to how the livelihood of the fishing community of Siridao has been affected. He further explained that this community being uneducated  is very much dependent on traditional fishing for their livelihood. He explained that due to purse seining fishing done by canoes in the jurisdiction of traditional fishermen, the later is left without catch due to over exploitation  of resources by canoes using purse seine net.”
15.   “A Fishermen informed that the canoes are highly equipped with fish finder instruments, double engines, generators etc to get a good catch. Due to over exploitation of the fish there will be no fish breeding a the finest life is destroyed. Their concern is that if this continued, in the years to come they will be left with no fish. He informed about the goondaism that have taken place few days ago and the disturbance caused by canoe owners for not allowing them to do illegal fishing” reads minutes further.

What this police complaint has actually attempted is to suppress dissent and open up Zuari river for continues exploitation besides destroy livelihood of  fishing communities practicing sustainable fishing practices like Gill net fishing etc. Awful role place is playing at present. Both Sanjay Pereira as well as Cosme Pires are DEEP members and international network will get activated in case of any untoward legal or illegal action against any of them.

Posted by Bharat Mukti Morcha at 20:27