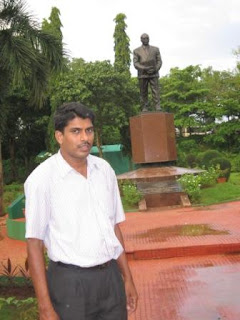 In this second part of interview to Bharat Mukti Morcha (BMM), Goa Unit blog www.bharatmukti.blogspot.in   on 20th July 2013 Cliffton de Souza of Velim, Salcete, Goa explains his role in agitation against Fish Mill project in Coastal Salcete, his confrontation with the Chief Minister who is also Home Minister Manohar Parrikar who has unleashed political vendetta against Cliffton through arrest in fabricated case. The first part of his interview is available, just click here.

BMM: In your last interview you said that Home Minister of Goa State is responsible for arresting you on 26th June 2013 in fabricated case, can you tell us why Home Minister in involved getting you arrested?

Cliffton: Due to my confrontation with Chief Minister Manohar Parrikar when he came to take my village land admeasuring 30,000 square meters; I strongly opposed him.

BMM: Why he wanted land of your village?

Cliffton: As per Chief Minister’s statement he wanted land to construct toilet, but as per villagers understanding the land was for Fish Mill for which villagers were opposed to.

BMM: When was the confrontation with Chief Minister (CM)?

Cliffton: It was on 9th September 2013 at Panchayat Hall, Velim, Salcete, Goa.

BMM: How many people were present at this meeting?

BMM: How many policemen were present at the meeting?

Cliffton: around 50 policemen including lady police.

BMM: How many MLAs were present at the meeting besides CM?

Cliffton: Two MLAs were present: Avertano Furtado who is Navelim MLA and a cabinet Minister in Parrikar government, and Benjamin Silva who is a Velim MLA.

BMM: How did the proceedings go at this meeting?

Cliffton: CM was telling that villagers must appoint a committee and he is giving 30 days for a decision. Then he consulted the Land acquisition officer present and modified his deadline to 10 days as land acquisition process was due to lapse on 29th September 2013.


Then I stood and told CM that this problem is not of the Committee but of the Gram Sabha of the villagers and the committee is not responsible for it. Gram Sabha has already opposed the Fish Mill.


Then he told me publicly that he will not listen to Gram Sabha and said that people who are silent want Fish Mill. He said he will use the voting system in Gram Sabha as in case of Switzerland. Then I asked him whether present Jetty at Cutbona that is renovated is legal or illegal. CM told me that if it illegal then to go to Court and he asked to sit down.


He was then explaining the procedures of the committee formation. He said that there will be committee of nine people and himself will be the President of that Committee. He will never listen to Gram Sabha and he will listen to the Committee that will be at village level with sole aim to acquire land for Fish Mill.


Then I stood up and told him that he is defying the Gram Sabha and reminded the CM that he is not superior to the President of India and the Supreme Court. Many other people joined me in protest at the meeting.


Then he cancelled the meeting saying that if people don’t want the land acquisition then he will support the people and with that meeting ended.

BMM: what makes you suspect that CM is taking revenge against you after that?

Cliffton: Because Police force is used against me when it was uncalled for. Police is under CM who is also the Home Minister.

BMM: What CM wants to achieve by taking revenge against you?

Cliffton: To keep me silent.

BMM: This is certainly unhealthy trend for democracy. Do you think that Goa CM is determined to destroy democracy?

BMM: What is that Goa CM wants to replace democracy with?

BMM:  What would you call this dictatorship of Brahmins?

Email ThisBlogThis!Share to TwitterShare to FacebookShare to Pinterest
Labels: Velim