Goa Chief Minister is heading for yet another mega blunder

SUDA must hand over land back to farmers legally 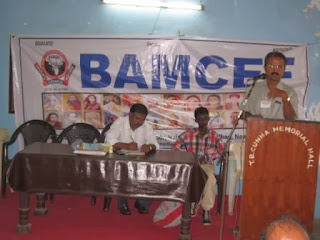 Bharat Mukti Morcha condemns the arm-twisting tactics adopted for the purpose of taking over of the farmers lands in Margao for RSS program. State flexing of muscles to hand over the cultivable agricultural land that is even ploughed is totally unacceptable and even shameful for RSS and Goa Chief Minister. The singular direction of State repression is directed towards Joseph Vaz, the vice-president of Catholic Association of Goa (CAG) and Secretary of Navelim Consumer and Civic Forum (NCCF) who is also the affected farmer.

On 13th December 2013 around 9.00 pm Police Sub-Inspector Gaonkar attached to Margao Police Station called up Joseph on his mobile and asked him to report to the police station in Margao at 10.30 am. Police Inspector told Joseph that SUDA (State Urban Development Agency) has filed police case through South Goa Collector against Joseph Vaz for carrying on mining in SUDA property in Margao near Konkan Railway station! Joseph even though is an engineer by Profession is no where involved in mining activities in Margao or anywhere in the World.

It is amazing as to how State government even see agricultural activities in Margao near railway station as mining! There has to be something terribly wrong with Goa Chief Minister Manohar Parrikar to engage in this affair. Perhaps he has run short of advisors and ideas. Nevermind, Manusmriti allows every Bamon to lie and it is as fine as breakfast with boiled eggs and salt.

Again on December 14, 2013 at around 9.25 am Joseph Vaz received call on his mobile from an unknown caller calling from mobile 9860038360. The caller who refused to disclose his name threatened Joseph Vaz with arrest and registration of FIR for digging for the purpose of mining of ore. He did not specify whether mining was for iron, manganese, silicon, uranium, diamond, copper or bauxite. Joseph advised the caller who was speaking on behalf of RSS (Racial Superiority System) set up for maintaining of Brahmanical hegemony over India with use of violence like assassination of M.K.Gandhi. Joseph Vaz advised the anonymous caller that RSS can hold their program in some ground or in stadium and not in paddy fields under cultivation by farmers. The caller insisted that they will hold the program in paddy field cultivated by the mulnivasi farmers of Navelim and Joseph should report to the police station and give undertaking that the farmers will not protest or disrupt RSS five days camp. Joseph then told the caller that let the police invite him with written letter. The caller then got angry and boisterous and said “You want to make this big issue? You want letter in writing? We will show you. We will arrest you.” Call letter is mandatory by law to communicate to person whom police want at police station in writing with signature of the Head of the Police Station.

The land belonged to farmers, then taken over by force and fraud without consulting farmers by SUDA - State Urban Development Agency, farmers went on cultivating and now pressure from RSS to surrender this land for their show off bonanza. Brahmanism has come under serious threat in India from well organized movement launched against it by Bharat Mukti Morcha on the ideological lines of Phule-Ambedkar-Shahu-Shivaji-Kanshiram thought.

One wonders whether police will carry on the investigations into the threats issued by the anonymous caller to Joseph Vaz in a swift manner that was demonstrated in Tarun Tejpal arrest. The possibilities are grim as the Chief Minister Manohar Parrikar who is Home Minister with control over police as well as RSS top cadre will ever do so as long as he is in power. He enjoys uncontrolled power that promotes uncontrolled corruption. As Chief Minister he enjoys Constitutional powers like directing SUDA, south Goa Collector and Police to act together against Joseph Vaz. As RSS cadre he enjoys extra-constitutional powers like deploying people to issue threats as it was done today. Yet Joseph is highly prayerful and spiritual person with protection from Holy Trinity and Our Lady of Rosary he is well protected and blessed with prudence and grace.

According to available information RSS want to carry on the five days program in paddy fields which are under cultivation by farmers. That land was acquired by SUDA some years ago in face of protest from farmers. The farmers however refused to budge and continued to cultivate till date. Now RSS want farmers to surrender their land - prepared for cultivation - for RSS to carry their activities of mass gathering in paddy fields. There cannot be anything as cruel thing as this act of RSS fully backed by the Chief Minister through Collector, police and through extra-constitutional methods adopted to prevent protests and frighten protesters.

The RSS Chief Minister Bamon Manohar Parrikar has come into power with the complete backing of the Goa Archbishop, has now picked up the vice-president of Catholic Association of Goa (CAG) Joseph Vaz for persecution. Persecution according to St.Athanasius comes from evil. Now the visible source of persecution of Joseph Vaz is the Chief Minister Manohar Parrikar backed by Goa Archbishop Felipe Neri Ferrao, both Bamons. If the analysis of St.Athanasius is deployed then both are currently possessed by evil and carry on the mission of evil. It is not very difficult to detect as to where evil prowls and headquatered.
Navelim farmers like famers elsewhere in the state of Goa have lost their land to various so called developmental projects one of these is to SUDA. From SUDA’s decision to take over farmers land and arbitrarily wresting of the titles of ownership away from farmers reflects anti-famers bias of SUDA. Bamons and their agents are currently on a rampage to finish traditional agriculture of Goa and take land control away from farmers and hand over land to corporate. Already corporate have control over fertilizers and pesticides and they want control over farming land too and introduce contract farming.  This is anti-farmer policy of the State and rightly farmers are protesting, and Bharat Mukti Morcha supports this protests.

RSS has been deployed in Margao to force farmers to surrender their land and suffer defeat. Farmers have refused to toe the line of RSS and refused to sign any undertaking that they will not protest against RSS in the face of forceful takeover of their land.

The key question however in this tense situation, is whether Goa should allow its cultivable ploughed paddy fields to be used as parade grounds for RSS that is committed to violently defend Brahmanism against any opposition?  The farmers of Navelim as well as Joseph Vaz through their vehement disagreements and refusal to part with their land have made their “No” very loud and clear. Farmers are not going to part their land to RSS come what may. RSS in Margao has gone against farmers. The polarization is very visible – on one side are the determined farmers and the other side is might of crumbling Brahmanism which by nature is bad system designed to keep Bamons privileged and rich, and mulnivasis slaves.

We have to choose between the two. The choice of Bharat Mukti Morcha is defense of farmers in this battle. The battle of farmers of Navelim is against the land invaders in the form of RSS. Police are compelled to support RSS as Home Minister who is also Chief Minister is RSS cadre. Due to this situation policies of RSS de facto turns out to be policies of the state. That is why Collector and police are roped in to promote RSS interests that are essentially brahmanical. But police has option to disobey Home Minister and support farmers. If police are blessed with courage and grace then they will exercise this option and stop terrorizing farmers. If they are cursed then they will resort to terror tactics as in this case. Police has option to choose blessings and curse, for whatever they choose will  be visible to all. Bharat Mukti Morcha is committed to defense of farmers and it will remain so till the end.
Posted by Bharat Mukti Morcha at 02:44