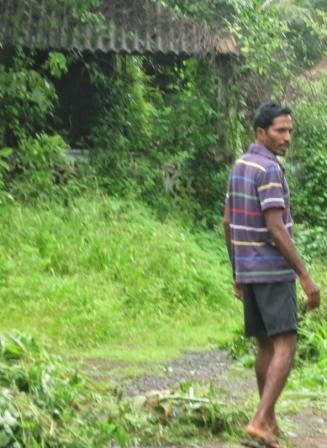 Manoj Parab, a Goa government employee of Electricity department today 29th July 2014 came to attack President, Bharat Mukti Morcha, Maggie Silveira at her residence in Vanxim. He was accompanied by two people from a private company surveying the land and roads. The incident that took place at around 1.00 pm was marked with tension as Manoj came to attack Maggie physically three times. As a woman there should be respect given by a man but with Mahendra Gaunekar intervening in the matter cops came immediately telling Maggie “Saiban apoilam” (Sir has called you). Maggie asked for call letter which they did not have. So they asked for Maggie’s mobile number which she shared. Maggie told them to serve call letter and then she will come. It looks that corporate bodies have right on the females living in Vanxim. They having their own identity to live on the island. Corporate and Mahendra Gaunekar troubling the villagers when they want to fight for truth and justice. Bharat Mukti Morcha condemns the high-handedness of police asking Maggie to come to police station without serving call letter. 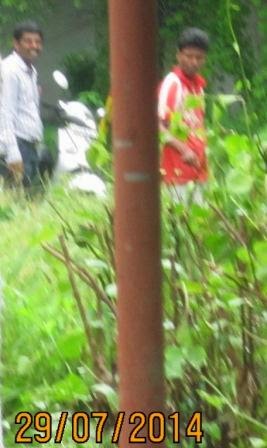 Vanxim island in Mandovi river is at the threshold of major resistance to the Golf Course, 5 star hotel, Private villas etc. Goa’s Catholic Church has strangely involved in selling of land and paddy fields, bunds and water bodies etc. It is estimated that paddy fields sold by the Archbishop Felipe Neri Ferrao itself is amounting to 4,18,550 square meters at the rate of Rs.20/- per square meter. Besides there is more land sold by earlier Archbishop Raul Nicolau Gonsalves during his tenure as per records procured from the Registrar’s office in Panjim.

Today’s attempted attack was yet another episode in this respect. Manoj Parab hailing from Vanxim island itself looks to be working as hired hand of those wanting to grab the island. Maggie told Manoj Parab to get away and move off.

Yet he refused and went on to issue threats to her husband Sebastian Rodrigues for catching Manoj Parab-in-confrontation  on camera. For a minute he withdrew and walked 20 meters to consult his advisors Assis Furtado  then came charging and threatening Sebastian. He warned him that in case he wants to stay in Vanxim he should stay nicely. He also threatened him of smashing the camera. He was given fitting retorts by Maggie.

This Manoj Parab has his brother as a constable posted at Old Goa police station. And based on him and his connections in Police he has been using high handed language.

What is the interesting and serious implications of today’s confrontation in Vanxim has been the locus standi of Manoj Parab to engage in survey work of land that does not belonged to him. He does not work for the Land Survey department. He works for electricity department with duty to distribute the electricity bills but not in Vanxim. In Vanxim he has no official role. Then what was he doing? Why he has to visit Maggie’s house in Vanxim and engage in confrontation? Perhaps he was doing this on behalf of Ozone corporate and Mahendra Gaunekar.

Now in case of any assault or attack on Maggie Silveira and Sebastian Rodrigues the first suspect will be Manoj Parab and his associates – Mahendra Gaunekar, Ozone corporate, and Archbishop Felipe Neri Ferrao. It looked as if he was paid by Mahendra Gaunekar and Ozone corporate to do this very act as he came charging at Maggie. He gave a threat and he went by saying “Tucam Kitem tem dakoitam” (See what I’ll do to you). Is this the way the females are to be treated that too by government servant by dishing out threats? He should be terminated from his services for going about doing such activities which are ethically and morally wrong for which he must be terminated as the activities are in contravention of law.

Goa Chief Minister can take note of this report and arrest Manoj Parab.

At 2.30 pm police constable along with Manoj Parab’s wife visited Maggie’s house asking her to report to the Old Goa Police Station. Maggie asked police to serve call letter. What right police had to ask Maggie to come to police station without call letter when she herself is attacked by male government servant? Indeed a sorry state of affairs brought about by prevailing Bamon Raj in Goa.

Posted by Bharat Mukti Morcha at 00:19