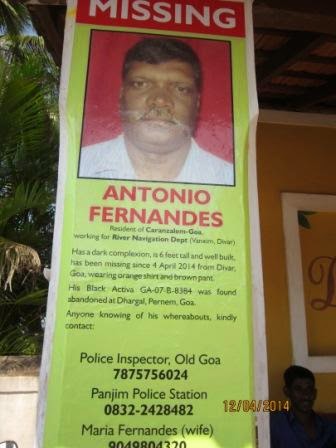 Three months has passed and Antonio Fernandes is still missing. He went missing on April 04, 2014 and search for Antonio has bothered public in Goa. Rosary procession was organized on Vanxim island in first fortnight of May 2014 with special prayer for his well being and early detection. Special Latin mass was offered in a Old Goa Church in May 2014 for this intention. Presently people are praying in different places and also deeply concerned about his well being wherever he is.

Some interests however are putting pressure on Maria, wife of Antonio to accept dead body found as that of Antonio and perform the funeral rites. The motive of these people needs to be investigated too. It looks like police department are involved in cover up operation for the reasons best known to them. If the dead body police claims is that of Antonio then it becomes duty of police to investigate as to who murdered him, trace the murderer and prosecute him/her/them. If the body is not that of Antonio then it becomes urgent that search be extended far and wide of Goa’s borders and beyond. For person just disappearing on sunny bright morning of April 04, 2014 is horrendous.

The behavior of the State government is rather strange in this matter. Its police force detected his bike in Dhargal but did not pressed dog squad on the spot. Why did police department have to do this act of omission? Is police department under pressure to cover up Antonio Fernandes missing/kidnapping case? Would police act in similar fashion if the missing person was nearer family relative etc of the Goa’s Chief Minister Manohar Parrikar who is also Home Minister of the State? If not, then why double standards in terms of investigations? Is it because CM is a bamon and Antonio is mulnivasi?

The moment it was decided that there  going to be public rosary in Vanxim island in May 2014- where Antonio Fernandes was working till last day of his visibility- on account of missing TV channel – HCN announced detection of dead body of Antonio Fernandes from the shrubs in Duler, Mapusa. On close examination of this body which has abdomen and legs missing, family members did not accept the body as that of missing Antonio. The forensic examination was proceeded with and report was to come from the laboratory in Hyderabad to check if the blood samples of Antonio’s brother and Son matches with the DNA of the found dead body. For two months now there is no sign of forensic report and tension of the Antonio’s family has only mounted further. On delegation to Superintendent of Police (North) family members were told that Goa police would forward priority letter to the forensic laboratory in Hyderabad for seeking the report on the dead body at the earliest. It is hoped that SP will keep up to her word and do all within her power to trace Antonio.

In the meanwhile discussions around missing of Antonio Fernandes have opened Pandora’s Box as it was revealed that Antonio Fernandes is not the first person to go missing from Vanxim. Almost 10 years ago in May 2005 two people – labourer Jamla Kujur and his son Ashok Kujur, tribals from Chhattisgarh working in Vanxim were kidnapped. They were abducted in the middle of the night from Vanxim where they were staying, put into canoe and moved to unknown destination. This happened on 19 May 2005. Maggie Silveira approached police but they refused to register kidnapping case and instead missing case was registered at Panjim police station. Even though it was clear from the early morning visit of Sadanand Bhosle to Maggie’s residence and his narrations to her that both Jamla and his Son Ashok were taken in his Canoe to Bicholim. Yet police never even interrogated Sadanand Bhosle.

From this day Sadanand Bhosle never visited Maggie’s residence till date. After police case was registered at Panjim police station Mahendra Gaunekar who was then frequent visitor to Vanxim for he had an intention to take over the Vanxim island, phoned Maggie Silveira and asked whether his name was given to police as kidnapping suspect. Maggie replied in the negative. Yet in the hindsight now it is clear he was the master mind of 2005 kidnappings as this worker – Jamla Kujur- used to work diligently on Maggie’s horticultural farms and Maggie used to rely on his abilities and loyalty. It was intention of Mahendra Gaunekar that indirectly damage be inflicted on Maggie Silveira and that’s why her worker was kidnapped and till today not traceable. Prior to the kidnappings Maggie was threatened with dire consequences if she does not stop her opposition to permanent stationing of Children from Kashmir whose parents are killed through terrorists encounters. These two hundred children were to be stationed on Vanxim island by Adolf Rodricks from Ponda of ‘Full na Pakli’ initiative, a cruel collaborator of equally cruel Mahendra Gaunekar.  Yet Maggie Silveira refused to compromise and continued to stand in defence of Vanxim even at a time when entire Vanxim islanders were scarred due to Kidnappings of Jamla and Ashok Kujur. Navhind Times refused to publish Maggie’s statement against Adolf Rodricks’s project in Vanxim citing that Adolf Rodricks is their esteemed customer who fetches them large revenue due to his advertizing.

Antonio Fernandes kidnapping/missing must be viewed in this context as well and Mahendra Gaunekar need to be interrogated to check whether he has any role in Antonio’s case. Mahendra Gaunekar wants to take over entire island of Vanxim for golf course, five star hotel, spa, helipad, Villas etc construction and it could be well he and his Ozone collaborators intention that atmosphere of fear spreads in Vanxim and Antonio Fernandes might have been made scapegoat to effect their conspiracy. At this state police must not leave any stone unturned and must immediately proceed to interrogate Mahendra Gaunekar and top officials of Ozone Corporate. Considering that Gaunekar and his Ozone corporate has faced stiff opposition it is likely that they are going to resort to such dangerous fear generating tactics. But will police department do this? Or will it be bulldozed under the political pressure from the highest quarters? It is less likely that Police will function without pressure for stakes are too high as evident from the very first act of omission of withholding police dogs from the scene of Antonio Fernandes’ abandoned bike in Dhargal, Pernem.

Yet it is a challenge before Goa police as they should not goof up for it is an issue of their prestige as well.

A committed, dedicated and highly responsible search must go in locating the kidnapped Antonio Fernandes’ whereabouts as three months has passed by.

Whenever any incident occurs it is spoken for a few days and then forgotten forever, this should not happen in the case of Antonio Fernandes as he got his three growing up children, wife, brother and sister who needs him. Whoever is involved in this kidnapping will not be at peace however big the money flow may be involved in closure of this case. Antonio’s family prayed at the holy cross at Vanxim plus brought the statue of Our Lady of Miraculous Medal, plus celebrated (offered) the Latin Mass. These prayers will all be answered. People should come out supporting tracing Antonio as today it is Antonio who is kidnapped tomorrow it could be you.

This pamphlet will be distributed in different places of Goa explaining conspiracy behind the Antonio’s kidnapping/missing. Print this page and distribute for we at Bharat Mukti Morcha will not keep quite till Antonio is traced.

Posted by Bharat Mukti Morcha at 23:09