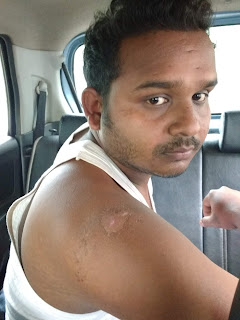 Bharat Mukti Morcha, Goa Unit condemns acid attack and threats to Sonshi mining protestor. Surendra Shablo Gawde from Sonshi, Sattari, Goa leads protest against open cast iron ore mining industry that compose of Vedanta, Sesa Goa, Quenim, Salgaocars amongst others.  Surendra is currently facing intimidation and threats from unknown culprits.  On June 30, 2018 unknown Hindi speaking man dashed against Surendra on the main road in Honda, Sattari, Goa; put something in his hand on Surendra's back shoulder and then quickly apologized and went away. Surendra proceeded home and found himself uneasy at shoulder back. He asked his mother to check his back and mother found bubbles underneath his skin. Not suspecting anything serious Surendra began treating wounds with home remedies but wound was slow to heal.

Then after four days on July 04, 2018 Surendra got an internet call on his mobile without any number. Caller identified himself as the same person who has dashed against him at Honda road and thrown acid on his back. Caller did not disclose his name and address but demanded that he withdraws all the cases against mining companies filed by him in various legal authorities.
After this Surendra informed his collaborators and villagers, and filed complaint at Valpoi Police Station where Shivram Vaingankar is currently Police Inspector. Police did not register FIR. On July 13, 2018 Surendra was called to the Police Station and taken for medical check up at Valpoi Health Centre, Valpoi. Doctor-on-duty after examining Surendra told him that he had wasted his half an hour and henceforth not to oppose mining industry in Sonshi. Identity of this doctor needs to be traced for giving such nasty advice. Police has to investigate whether local MLA Viswajit Rane is involved in pressurizing the doctor to communicate this message to all the mining protesters in Goa.
Question arises as to whether this type of attack was on any bamon or Chief Minister or Ministers or Governor or IAS officer or IPS officer or IFS officer would police be as lazy as in this case of Surendra Sablo Gawde? Or are police under order from Home Ministry to act lazy so that extra-legal agents prowling around could intimidate protesters against mining?

Bharat Mukti Morcha express total support and solidarity with Surendra Sablo Gawde and his organization - GAKUVED. Bharat Mukti Morcha calls for investigations from Cyber crime cell in order to detect identity of the culprit and enforce arrest. If Goa's Home Minister wants he can easily find identity of the culprit and master mind behind this. The problem is that Home Minister of Goa is also the Mining minister.
Discuss this message with at least five people in your contact. Then form local action group wherever you are to follow up on the matter. Together lets march towards Justice, together let’s build up Peace. Let’s together destroy dominating powers against humanity and against ecology.