According to reports one tribal person from Gokuldem, Quepem, Goa named Bhiva Kust Velip has been booked for trespass into forest and cutting of trees by Range Forest Officer (RFO), Padi, Goa. Moreover according to reports RFO has asked Velip to fill up self incriminating Affidavit admitting that Velip was involved in illegal cutting of tree and willing to pay whatsoever fines imposed by the Government according to law in force and to appear before RFO whenever called. When this Freemason law did came in force in Goa. There are already three Judgments of Supreme Court of India that has termed December 1961 armed entry into Goa ordered by Indian Congress Party’s Nehru as an act of Conquest. This means that act of Padi RFO is colonial in nature.The fact that RFO goes and penalizes tribal person Bhiva Kust Velip for cutting of 12 trees, trimming of 13 trees and burning the area of government forest of Gokuldem village of Quepem Taluka on July 20, 2018 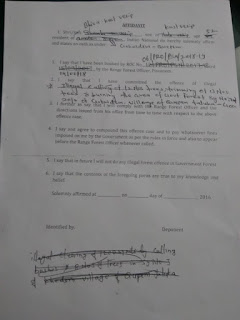 Shifting cultivation in forest is well known practice of tribal people all over the world based on principle of regeneration of ecology as venues of cultivation is changed after every few years and forest is allowed to regenerate. If Goa’s own tribal people are harassed this way then where is Freedom we celebrate on August 15? Where is Liberation that we celebrate on December 19? Why government diverted large amount of forest land to mining? Mining companies not only cut down trees but entire mountains razed down exported.

Bharat Mukti Morcha, Goa Unit strongly condemns act of Padi RFO to use intimidation of law against tribal people of Goa and calls for immediate halt to ongoing harassment.

Posted by Bharat Mukti Morcha at 02:14