List of Vanxim tenants as per Goa Government 1974 records

There are several requests to know the names of Tenants of Vanxim from Activists and Researchers. We are thankful for the overwhelming public interest in Vanxim affairs involving Church and the State. We are making this list of Vanxim tenants public in order for you to have better understanding of ground reality in Vanxim. This letter from the office of the Mamlatdar of Tiswadi Taluka, Panjim  dated 2nd May 1974 claims Vanxim Paddy fields as Government Land. When did these paddy fields turned into Santa Monica land for One Archbishop Gonsalves to Agree to sell to Gaunekar in 1999 and another Archbishop Ferrao to actually sell it to Gaunekar in 2006? There is a need for high level investigations on this issue.

In this document there are 60 names. These names are mixed from Vanxim and from Naroa in Bicholim. Due to vastness of paddy fields People of Vanxim in 1950s and 1960s involved People of Naroa in Bicholim to cultivate the Paddy fields while Portuguese still ruled Goa. However after the tenancy laws were passed by Indian Government those people from Naroa who were involved by Vanxim people to cultivate were listed as separate cultivators. There are nearly 30 people on this list that are from Naroa village and 30 from Vanxim who are original cultivators. That amounts to 60. Paper makes two names difficult to read. No. 32: Tukaram Sonoo Naik and No. 33: Krishna Narayan Padelkar. The rest of names are clear.

Currently there is corporate rage to erase these names from the land records and erase agriculture all together. These documents are made public for the purpose of those who seek to use memory to shape future with solid foundation of our past. 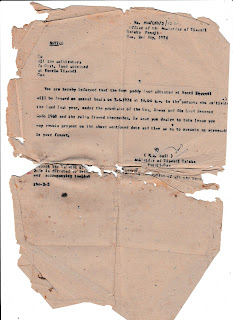 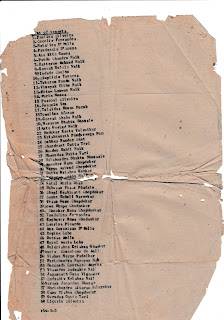 Posted by Bharat Mukti Morcha at 01:57