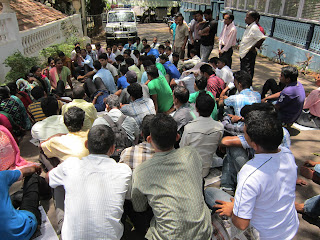 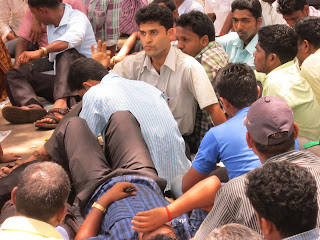 Bharat Mukti Morcha extends support to the Bhahujan mulnivasi youth protesting against the injustice meted out to them in recruitment for appointments in Goa Medical College and Directorate of Health Services, Department of Mines and Geology, and Department of Water Resources.

Around 900 youth recruited for different type and categoryof jobs are protesting the political blockade of their appointment to the selectedposts. The political block has been created by Chief Minister of Goa Manohar Parrikar.

Subsequently after the elections BJP government acquired power with Manohar Parrikar as Chief Minister. When the youth followed up on the process of their recruitment Chief Minister did not support the selected bhahujan mulnivasi youth thereby dishonoring legally valid memorandum.

Bharat Mukti Morcha considers agitation of these mulnivasi youth just and fair, and extends support to them. It is a great brahmanical conspiracy that has driven Goa's Bahujan samaj to the street protests. This is a case of political manipulation to deny these posts to the selected candidates.

Email ThisBlogThis!Share to TwitterShare to FacebookShare to Pinterest
Labels: Workers