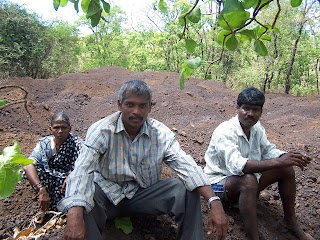 Bharat Mukti Morcha strongly condemns Police harassment of Rama Velip, President of Bharat Mukti Morcha, Colomba Unit, Sanguem. Latest Police pressure tactics against Rama Velip began on 25th July 2012, one day after it was established in the Court of law at Sanguem that Fomento used explosives to blast Hiralal Khodidas mine, Colomba in the year 2007 when Fomento witness Babu Dayanand Gaonkar disclosed during cross examination that blasting on this mine was stopped after Rama Velip filed complaint against blasting.

Next day at around 11 am Rama Velip who belongs to Scheduled Tribe got a call from Quepem police station asking him to report to the police station with his lawyer as fresh criminal case was filed against him. Rama’s lawyer Advocate John Fernandes called up Quepem Police Station to know about the details of the case.  Police refused to divulge the details of the case. This is a serious violation of the human Rights. Rama was not served call letter nor arrest warrant issued.

Then today 26th July 2012 team of four policemen in a Police Jeep arrived at the residence of Rama Velip at 7.00 am in the morning and sought to take him to the Police station. Rama Velip and the Colomba villagers that gathered there sought call letter or arrest warrant to take Rama Velip into Police custody. Police had none of the documents. After arguing for 90 minutes police left Rama’s residence to an unknown destination with their Jeep. It is unlawful on the part of Police to seek a custody of the person without arrest warrant or call letter.

Police are directly responsible to Home Minister. Goa’s Home Minister is also Chief Minister Manohar Parrikar. Manohar Parrikar while he was in the opposition had visited Rama Velip and two of them even had under taken visit to the forests in Sanguem to examine illegal mining dumps in Forest. Rama Velip is known to Manohar Parrikar. Later on 19 June 2008 Mr.Parrikar colluded with Auduth Timblo and called Colamb villagers protesting against mining industry ‘Naxalites’. He made this statement in the Goa Legislative Assembly. When he faced opposition from public he fled the county to USA and returned after one month. This is a brahmanical betrayal of Adivasis in Goa.

Colomba villagers continued their opposition against mining industry under the banner of GAKUVED and at one point of time had even succeeded in shutting down Hiralal Khodidas mine for few months till another bamon practicing medicine Dr.Avadooth Prabhudesai infiltrated into the movement and  divided the villagers and made sure that the mine re-starts to the detriment of the villagers agriculture. In fact he went for the coconut breaking ceremony to re-start the mine. he broke the coconut himself. Every time he was exposed he has been threatening the villagers specially the tribal people.

Over 600 police cases are already filed against Colomba villagers for protesting against mining industry and they have to make trips to the courts every week sometimes even twice or thrice a week. Filing of police cases has been the favorite strategy of creating fear amongst those mulnivasis opposing mining industry of then Congress Brahminism and continues in the era of BJP Brahmanism. Yet in spite of all the fear villagers went ahead with the protests against all odds and this village is responsible to break the culture of silence against mining industry in Goa and to create large scale awareness about dangers of mining amongst people all over Goa and beyond.

Brahmanical forces viewed Colomba protests of tribal people as threat to their system and tried various methods to defeat and demoralize them. They could not succeed. Colomba villagers joined nationwide movement of Bharat Mukti Morcha to free this country from the Brahmanical colonialism just like we are free from Portuguese and British Colonialism. Brahmins are invaders from Eurasian land and their DNA tests by Michael Bamshed of Uttah University, USA confirmed that they are foreigners. Besides being foreigners they are also tiny minority. What right do these Eurasian minority has to rule over Goa and India? They have no right at all. Minority cannot rule over majority in Democracy. Their rule is fraud and does not adhere to the Indian constitution with regard to implementation of 5th Schedule of the Constitution guaranteeing self-rule of Scheduled Tribes in Scheduled Areas.

In Goa Gawdas, Kunbis, Velips are declared as Scheduled Tribes much against the wishes of Manohar Parrikar but 5th Schedule is not implemented. This is the reason as to why police cases are being filed against tribal people of Colomba, Cavrem and elsewhere.

Brahmanism of BJP tried its level best to lead tribal people astray through various movements and tribal people also got carried away. The best example to this is seen in 25th May 2011 road blockade at Balli, Quepem in which two of the best of tribal youth were burnt to death. Brahmins were behind this agitation as Brahmins wanted to make sure that Tribal people of Goa are kept diverted in their attention from raising the demand of implementation of 5th Schedule in Goa. Brahmins were even seen mobilizing for this road blockade. Previous night one Brahmin had come to the house of Rama Velip to invite him to the road blockade program in Balli!

Manohar Parrikar after taking over as Chief minister of Goa is trying his very best to legitimize and legalize mining industry in Goa. As a Home Minister it is evident from the pressure tactics adopted by Quepem Police, Manohar Parrikar has decided to unleash police repression on those protesting mining industry. Rama Velip is the first target. He is targeted not only for his fearless leadership but also for his ability to inspire people to protest.

This time Rama Velip is not alone. This time he is heading Colomba Unit of Bharat Mukti Morcha. This time fight back is not just against mining industry. The force of Rama Velip is not just tribal people of Colomba but mulnivasis people from every religion and every Jati across India. This is no longer a contest between mining industry and agriculture. It is a fight between all the mulnivasis of India and minority Eurasian Brahmins who has placed themselves in the power through manipulation and deceit. We are entering into a decisive stage of this battle and it is crystal clear as to who is the enemy of mulnivasis of India. It is undoubtedly Brahmin, Bamon, Saraswats.  This fight is going on all over the country and this fight is on in Goa too. Fresh police cases filed against Rama Velip is a Brahmanical assault on Mulnivasis. Bharat Mukti Morcha condemns filing of police cases against Rama Velip.

There is a deeper conspiracy involved here. Bamons has prepared a proxy from tribal community in order to file police cases against Rama Velip. This has been done in order to create a fight amongst tribal people themselves. Bharat Mukti Morcha has understood this conspiracy very well. Bharat Mukti Morcha accepts Eurasian Brahmins as enemies and expects only genuine enmity from them. For this has been the mulnivasi agitation tradition in India beginning from Jyotibha Phule whom Manohar Parrikar has quoted in his last budget speech, Shahu Maharaj and Vishwaratna Babasaheb Dr. Bhimrao Ambedkar.

Police harassment of Rama Velip is part of Brahmanical strategy to destroy self-reliant leadership of Scheduled Tribes in Goa. Rama Velip has provided most daring and self reliant leadership to Scheduled Tribes in Goa. He has not got carried away either by Brahmanism of Congress or BJP, nor has he been carried away by Brahmanism of Anna Hazare and Ramdev Baba. This is the reason as to why Brahmanical powers led by Avadooth Timblo, Manohar Parrikar are so desperate to finish off this leadership. Rama Velip has destroyed well planned Brahmanical strategy of segregation of Tribes, and he has reached out and formed alliances with Scheduled Caste, OBC, Marathas, Converted mulnivasis people etc. Naturally therefore when police cases are filed against Rama Velip all the mulnivasi representatives across the board have felt this Brahmanical aggression and believe that only fitting retaliation in due course of time against Brahmanism will settle the scores. Dr. Ambedkar had done this by burning of Manusmriti.  Bharat Mukti Morcha has already burned the budget of Manohar Parrikar’s BJP government and Congress led Indian government in Colomba few months ago. Mulnivasis will surely be generous in dishing out stronger retaliation through constitutional means as the need of the hour knocks our lives.

Bharat Mukti Morcha demands that police harassment of Rama Velip be stopped immediately and all the police cases against him and all the anti-mining protestors from the Colomba village be withdrawn.

Posted by Bharat Mukti Morcha at 06:05