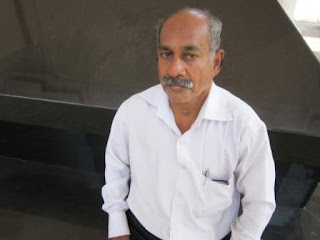 
According to Jalmi, corporate houses with links to Bamons and Banias are in collusion with British lobbies to take over this Fort to convert it into a starred hotel. Bharat Mukti Morcha appreciates Sainath Jalmi's efforts and advises Goa government to halt privatization plans.
Posted by Bharat Mukti Morcha at 02:16 3 comments:

Motesh replies to the Show cause notice of Deputy collector, Quepem

IN THE COURT OF THE DEPUTY COLLECTOR AND SUB-
DIVISIONAL MAGISTRATE, AT SOUTH GOA SUB-DIVISION,
QUEPEM-GOA

MAY IT PLEASE YOUR HONOUR:
The Respondent herein above is in receipt of the above refered notice and in reply thereto I have to state and submit as under:

The above reply was submitted to the deputy collector on 9th January 2012. Still deputy collector insisted for a bond or else threatened Motesh of arrest. Our democracy has ceased to be democracy. It is only brahmanocracy.  Or else why not a single FIR has been filed against mining companies in spite of complaints by Colomba People?
Posted by Bharat Mukti Morcha at 10:50 No comments: 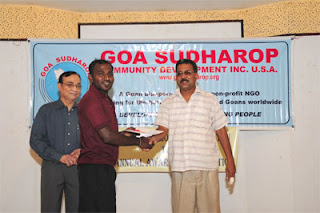 Motesh Antao was awarded Youth Achiever award in 2010 in recognition for his resistance for mining in Goa. This is a picture from Goa sudharop website. This pecture shows Motesh being presented with the award from the hands of Rajendra Kerker, well known mulnivasi environmentalist from Goa. In the background is Mr.Ibonio Fernandes of Goa Sudharop group based in California, USA. 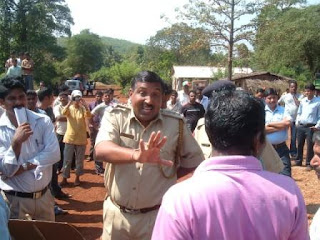 The above shows PI Santosh Desai charging at Motesh Antao on November 12 2008 while on protest against Hiralal Khodidas mine operated by Fomento company owned by Bamon Audoot Timblo causing large scale destruction of paddy fields and forest, water and air of colamb and western ghats. PI Santosh Desai was awarded Chief Minister's gold medal for his role in repressing revolt against mining industry.


Bharat Mukti Morcha's Colomba unit vice-president Motesh Antao has been decalred as a threat to Goa Assembly elections that are to take place on March 03, 2012. Motesh is a well know for his relentless resistance to mining industry specially to Fomentos owned by Bamon Audooth Timblo who also owns Cidade de Goa five star hotel. In order to silence Colamb villagers large number police cases has been filed against Colamb villagers and charge sheeted for the further process at Courts in Sanguem and Quepem. Motesh may be criminal to the brahmanical State of Goa but certainly he is a genuine freedom fighter for mulnivasi people of Goa that are tormented and repressed by Brahmanical State in place.


Motesh Antao has been repeatedly harassed and false cases filed against him just like others in Colomba, Sanguem. Last month on 20th December 2011 policemen PSI Prasal Desai had slapped him after Motesh refused to pay bribe of Rs.100/-. The details of this is available here.


The text of the letter show cause notice to Motesh Antao is as follows:


IN THE COURT OF THE DEPUTY COLLECTOR AND SUB DIVISIONAL MAGISTRATE, AT SOUTH GOA DIVISION, QUEPEM GOA


SHOW CAUSE NOTICE UNDER SECTION 111 OF Cr.P.C.


It is further reported that in view of ensuring Elections to Goa Legislative Assembly, 2012, you are likely to threaten and intimate the voters, creating Law and order problem, commissioning of cognizable offence thereby causing obstacle/hinderance in conducting the smooth and fair Election.


Hence you are hereby directed u/s 116(3) of Cr.P.C to execute an interim bond of Rs.5000/- to maintain good behavior until the conclusion of inquiry.


Forwarded to the P.I. Quepem Police Sation for service and return before date of hearing.


The I.O./Inquiry Officer is directed to the trace the whereabouts of the opponent and produce him before this Court on above date and time without fail.
Posted by Bharat Mukti Morcha at 07:35 No comments: