Objections to the installation of Mobile Towers at Bambolim and Nauxim

To,
The Member-Secretary,
Goa State Pollution Control Board,
Panjim, Goa

Subject: Objections to the installation of Mobile Towers at Bambolim and Nauxim

Officials and their family members at Goa State Pollution Control Board are not affected by radiation from these mobile towers in Bambolim-Nauxim villages as their office is located at safe distance in Panjim and it is not expected that they should be bothered about public health of Bambolim and surrounding villages considering that influence of real estate and tourism lobby, and this is no longer a secret. Other wise NOC for two mobile towers in Bambolim and Nauxim would have been revoked the moment objections to it are filed by Bharat Mukti Morcha.
Instead we have noted that one more mobile tower has been installed in Bambolim at survey number 96 on the night of 19th November 2015. We object this mobile tower too.
We have also witnessed installation of Ground Based Mast (GBM) to provide 4 G broadband services by Reliance Jio Infocomm Limited adjacent to NH 17 in front of Goa Medical College. So all together there are four mobile towers in the jurisdiction of Bambolim Panchayat that are major threats to public health with radiation threats. We call upon your office to take immediately revoke permissions to these mobile towers.

So far our experience is not pleasant there are signs of state of administrative paralysis in the functioning of Goa State Pollution Control Board. It is limping due to influence of money bags and power of the corporate lobbies such as Reliance, Aldeia de Goa and Hotel Grand Hyatt. Bambolim Panchayat must not follow the example of Goa State Pollution Control Board and get itself geared pro-actively to change the situation and notify every level of environment ministry of Goa to act and get the permissions to mobile towers revoked and lodge protests.

Bharat Mukti Morcha calls upon Principal Secretary (Environment) to intervene and get all the approvals to mobile towers in Bambolim – Nauxim Panchayat jurisdiction revoked immediately.

Posted by Bharat Mukti Morcha at 03:27 No comments:

To,
The Captain of Ports,
Panjim, Goa

Superintendent of Police, Coastal Security, Panjim in a letter dated 30.10.2015 to the President, Bharat Mukti Morcha has confirmed after detail investigations that it is the Captain of Ports that has granted the permissions for officials of Hotel Grand Hyatt to carry on water sports activities within the area of Hyatt Bambolim Beach within 200 meters of shore to sea upto 01 Nautical Mile.

This permission is not acceptable to the traditional fishermen in the localities of Siridao, Bambolim, Nauxim, Cacra and Odxel as it directly clashes with fishing activities. Bharat Mukti Morcha is opposed to this pro-corporate, anti-traditional fishing decision of the Captain of Ports moreover as this Hotel itself is illegal.

Bharat Mukti Morcha calls upon your office to immediately revoke all the permissions granted to any officials of Hotel Grand Hyatt including Aqua Sail with immediate effect.


Cacra unit
Posted by Bharat Mukti Morcha at 03:26 No comments:

To,
The Minister of Fisheries,
Secretariat,
Porvorim, Goa

To,
The Superintendent,
Coastal Security,
Panjim

Subject: Attack on Fishing nets inside Zuari by illegal mini per seining boats

Posted by Bharat Mukti Morcha at 03:24 No comments:

Bharat Mukti Morcha strongly condemns the knife attack on Sanjay Mayekar on Nomember 26, 2015 with grievous injuries in Mayem, Bicholim. Sanjay is a brother of Kashinath Mayekar of Mayem Nagrik Samiti dealing with evacuee property issue. At the time of attack Sanjay was a place where survey work was going on to grant land titles to the Mayem villagers. For so long Mayem has witnessed obstacles to legal land access to the villagers while mining companies had obstacle free access to evacuee property in Mayem especially Chowgules that had dried up 300 village water ground wells causing scarcity of water for agriculture.

Police complaints filed by Fr. Bismarque before his murder 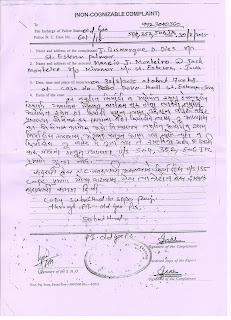 Here are the scanned copies of the two complaints filed by Fr. Bismarck on threats he received. One complaints above in Marathi is dated 30th August 2015 and the accused is one Mancio J. Monteiro @ Jack Monteiro resident of Miramar and native of St. Estevam, Juva. Complaint was registered under sections 504, 352, 506 Indian Penal Code. Fr. Bismarque was threatened on 30th August 2015 at about 17.00 hours at Casa da Povo Hall, St.Estevam, Juva. The case was to be submitted to Court under section 155 of Code of Criminal Procedure. The copy is also marked to be submitted to SDPO Panaji through P.I. Old Goa Police Station. The complaint has two signatures of Fr. Bismarque Dias, r/o St. Estavam, Palmar. Non-Cognizable complaint. 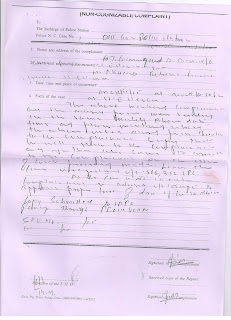 The second complaint Fr. Bismark filed at Old Goa Police station on 04/11/2015 against Mr.Assuncao Rubin Fernandes of St.Estevam. The accused is mentioned as Fr.Bismarque's neighbour. and fight took place at 10.50 am. Fr.Bismarque was threatened again.This complaint is registered under section 506, 352 of IPC. Non-Cognizable Complaint.

You may download these pictures for reference or get the fresh copies from Old Goa Police Station.

Posted by Bharat Mukti Morcha at 03:34 No comments:


I.      Bharat Mukti Morcha (BMM) today observed two minutes silence in memory of Fr. Bismarque and those killed in terror attacks in Paris. BMM had a detail discussion on the shockingly torture and murder of late Fr. Bismarque Dias. BMM calls for immediate arrests and trial of those responsible for this murder. Goa Chief Minister must refrain from making irresponsible statements on Fr.Bismarque’s murder. If Chief Minister Parsekar feels incapable to admit the facts surrounding Fr. Bismarque’s murder then he must resign immediately. All Social Activists of Goa, Family members of Fr.Bismarque and People of Goa cannot be taken for granted anymore as Goans are known for what they are; as and when required they will act accordingly. As Chief Minister is holding the portfolio of Home Ministry, that doesn’t mean he can come out with statements as he is pleased with. Fr. Bismarque’s death is a murder, that too a tortured one. Manipulating the reports etc will not help. Truth will prevail that it is a murder. Long Live Fr. Bismarque’s good works for Vanxim, Tiracol, Carmona, Tuem and much more beyond. This murder has elevated Fr.Bismarque to the category of Martyr. Adeus Fr.Bismarque.


III.                   BMM welcomes decision of the Goa Police to increase the surveillance of Zuari River to curb illegal fishing activities as stated in this very letter. However Police letter does not mention the illegal fishing that is destructive ecology that is being carried on through trawling inspite of so many complaints from BMM.


IV.                  BMM also objects to the attempts of the Director of Fisheries Shamila Monteiro to pressurize fishermen objecting illegal trawling in Zuari River. It is well established fact that the sustained dragging of mobile gear (nets with all the weights, otterboards and chains) across the sea floor has been compared to the clear felling of tropical rainforest. These nets disturb the riverbed and alter its complexity, reduce benthic production and lead to substantial changes in benthic community structure and habitat. Moreover, these disturbed soft bottom habitats may never return to their earlier or ‘pristine’ state and often taken over by weedy species, similar to those that take over the clear felled patches in tropical rainforests.


V.                   The way Fisheries department is administrating its affairs is pathetic. Shamila Monteiro is not fit to direct this department as she told fisherman from Siridao Soccorro Braganza on 12th November 2015 in her cabin that she is ignorant of the laws that prohibit trawlers from carrying on fishing within 5 kms from the sea shore and inside the rivers. This means Director is not even aware of the reasons as to why her department has given licenses to so many trawlers to carry on fishing in Arabian Sea and not in any of the rivers of Goa, and what could be the ecological harmful impacts trawlers are inflicting on the marine ecology.


VI.                  BMM congratulates Betul, Naqueri, Quittol, and Canaguinim in Quepem taluka coast for their opposition to the Defence expo project on Naqueri plateau on November 08, 2015 Gram Sabha meeting. The project promoted by India’s defense minister Manohar Parrikar is nothing but the land grab of 6 lakh square meters, area including runway for aircrafts. BMM is aware of the intense struggle of the people of these villages to fight land grab for Golf Course in 1993-95 period against the then Government headed by late Dr.Wilfred de Souza. Then during 2006-2007 government forcefully took over this land for Food Park but actually to be developed for 800 villas and Golf Course by London based real estate group - Claremont. Due to the public protest this land grab too did not materialized. Now another land grab is attempted in the name of Defense Expo.


VII.                 BMM extends support and solidarity with people from Betul, Naqueri, Quittol, Canaguinim and neighboring villages’ people opposing this defense expo from Cabo-da-Rama, Nuem, Velim etc. Defense expo is located on this Naqueri plateau only to deprive land to the future generation of the local residents and to drive local people to the brink of desperation and landlessness. BMM protests with the Ministry of Defense, New Delhi as well as with Indian Air Force for imposing Defense expo on Goa.


IX.                  BMM also note with serious concern the way democratic process has been subverted and Panchayats and Municipalities has been bypassed in granting of NOC to the Reliance Jio Infocomm Limited to install Ground Based Masts (GBMs) to provide 4 G broadband services across Goa in Panchayat and Municipality areas in adjacent to National Highways. NOC for this has been granted by the office of the Superintending Engineer PWD, Panjim. BMM is also concerned that these GBMs are entrusted with the task of surveillance by installing CCTV cameras on Highways packaged as ‘facility for general public’.


X.                   BMM also condemns high handed attitude of Bambolim Talathi Prameya P. Prabhu Miringker displayed while on site inspection of traditional path ways and public cross by Hotel Grand Hyatt on 23.10.2015 in Bambolim. Mr. Miringker was carrying on site inspection based on complaint of Rohidas Andrade to the Tiwadi mamlatdar. Mr. Miringker told Rohidas Andrade that Hotel Grand Hyatt can do anything they want and no one can object. This statement is evidence that Talathi is biased in his mindset in favour of luxury hotel. BMM considers this as mockery of democracy.