Sao Mathias Panchayat Gram Sabha took place on 28th October 2012 with Vanxim luxury hotel project promoted by Bamons Mahendra Gaunekar who purchased the large chunk of land from Goa Archbishop Bamon Felipe Neri Ferrao,  on top priority of discussion. The retaining wall project for Vanxim pending before the Panchayat was objected to by 57 people registered voters in Vanxim including its elected representative to the Panchayat. Retaining wall has been the part of infrastructure mentioned in 109 page joint development agreement between Mahendra Gaunekar and his wife Sonali Gaunekar on one side and Ozone group on the other.

The modus operandi adopted by these developers has been to implement the project without submitting the same to the local Panchayat. Retaining wall around the Vanxim island has been one such fundamental move. This move faced major setback in the latest Gram Sabha of 28th October 2012.

This island of Vanxim (Capao) in Goa's Tiswadi taluka is facing stiff resistance to various projects for the past couple of decades with things picking up in intensity over the past few years of protests.

Local Marathi daily Tarun Bharat and English daily Times of India, both of 29th October 2012 carried the Gram Sabha reports with some details. 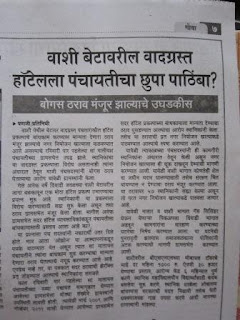 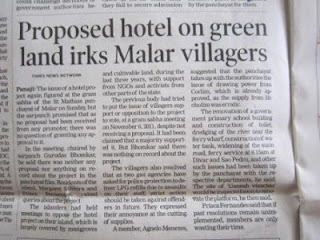 Posted by Bharat Mukti Morcha at 00:00 No comments:

Bharat Mukti Morcha expresses support to people of Revora, Bardez, Goa protesting against the illegal felling of trees in survey number 22/2 near government primary school complaint to this effect has been filed by Dilip Chodankar with different government authorities including village Panchayat on 22nd October 2012. News of this protest has been published in the local marathi dailies Lokmat of 26th October 2012 and Tarun Bharat of 25th October 2012. This is a serious matter that needs investigation and punishment to those involved in the matter.

This not so isolated incident in Revora has proved that forest in Goa is not just chopped for the open cast iron ore mining but also for many other purposes like putting up building for commercial housing that are beyond the economic reach of the mulnivasi people. Bharat Mukti Morcha maintains that this is a deliberate situation promoted by Bamani rule in the State of Goa in order to push the mulnivasi people of Goa towards poverty and deprivation. 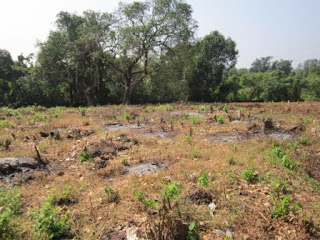 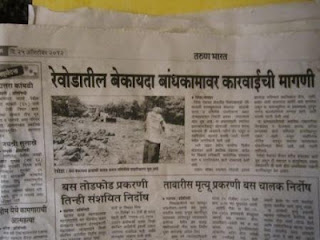 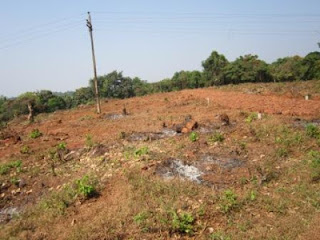 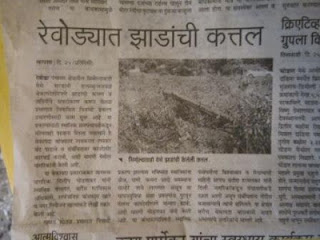 Posted by Bharat Mukti Morcha at 08:01 No comments:

Goa’s mining loot and plunder can be solved only with nation wide agitation. It is the bamani rule in India as well in Goa that is responsible for the Goa’s mining plunder. Target of the protest movement has to be brahmanical bondage of our Country as well as our State of Goa. Bamani bondage is what is responsible for the massive destruction of Goa’s eco-system and livelihoods and making mulnivasis dependent upon mining industry. This situation is sign of bamani bondage. It is allowing systematic destruction of mulnivasi people.

Mulnivasis are original people of this land. They include SC, ST,OBC, those converted from these categories into Christianity, Islam, Buddism, Sikhism. The entire bamons are not included as they are foreigners as proved on record from DNA testing by Michael Bamsad of Utah Universityin collaboration with Anthropological Survey of India based in Calcutta.

Mulnivasi people of Goa have to get connected with nation wide agitation for liberation. Currently this agitation is ongoing under the banner of Bharat Mukti Morcha. Only when our entire country is free Goa will be free too. For this it is important for mulnivasis to contribute their time, talents and treasure. This great task of liberation will have to be carried forward by the mulnivasi people themselves. Bamons are experts at fooling our people. They have fooled our people for over five centuries and captured our land, and our minds.

It is not enough that we read this book and sit back. It is very important to get involved in this great liberation movement. It is therefore urgent appeal to all the mulnivasi people throw themselves wholeheartedly in this nation wide liberation movement.  We have to join in order to end the bamani bondages forever and make this country as well Goa highly prosperous. Goa’s mining export makes only handful of companies in the bamani control prosperous while the rest of population is facing steady captivity of bank loans and degraded ecological mining fall outs.

Very important to act now:- lets all come together to overthrow the entire bamani rule.

Email ThisBlogThis!Share to TwitterShare to FacebookShare to Pinterest
Labels: Mining