Goa enters into mass betrayal of its masses

Manohar Parrikar himself is Rajya Sabha MP from Lucknow.

We do not know as to what is the motivation of these elected members of the Goa Legislative Assembly to betray People of Goa at such a massive scale in a manner most non-deceptive in the history of Goa. However we present the status as it is. Is this Bamon Raj ?
Posted by Bharat Mukti Morcha at 04:54 No comments:

To,
The Director,
Directorate of Fisheries, Panjim, Goa

It has come to our notice that Vendanta Sesa Goa mining company is involved in filing various complaints with fisheries department against fishermen carrying on fishing activities in Zuari river citing various reasons. We write to lodge our strong protest against Vedanta Sesa Goa mining company for harassing fishermen. Mining companies are outstanding destroyers of nature, ecology and environment and now Vendant, a company registered at London Stock exchange is all out to trouble fishermen in Zuari river. Fishing is birthright of fishermen and Vedanta has no right to disrupt our fishing. Vedanta must know very well that mining in Goa is mere plunder. The best proof is from Central government appointed Justice Shah Commission report.

Let Vedanta not interfere with our fishing activities which we and before us our ancestors have been carrying on since time immemorial even then there was mining barges in operation.

Dear Sir,
There has been sudden rise in the incidents of disruption of fishing activities in Zuari river very close to coast of Siridao, Bambolim, Nauxim, Cacra and Odxel due to water sports activities of Aqua sail.

Kindly take action in this regard and stop water sports activities in Zuari.

Dear Sir,
There has been sudden rise in the incidents of illegal trawler fishing in Zuari river very close to coast of Siridao, Bambolim, Nauxim, Cacra and Odxel.
You are requested to urgently attend to this and remedy the situation. The current system of patrolling from fisheries department as well as Police suffers from serious deficiency and that’s how illegalities in Zuari from Trawlers continue unabated in spite of our telephonic complaints so far.
Your urgent attention is required to restore order in Zuari by totally stopping trawlers from carrying illegal fishing. Our support and co-operation will always be extended to you in whatever manner possible.

Voters in Goa gets treatment as washroom tissue paper

It is perhaps for the first time in history of Democracy in Goa that voters are treated on par with tissue paper - use and discard. The recent electoral results for Goa Assembly gave just 13 seats out of 40 to BJP. Yet it went ahead and formed the Government reportedly with the support of MGP, NCP and GF both won three seats each based on their electoral victory against BJP party. Others who supported are 04 independents three of whom elected defeating BJP candidates and one defeating MGP candidate.

Non-deceptive betrayal of Goan voters by moving Indian Defense Minister Parrikar to Goa as Chief Minister has fuelled the crisis of legitimacy to the State Government. Supreme Court direction curtailing limits to prove the majority on the floor of the house to three has further created tensions for the newly installed cabinet without portfolios.

It is now left to mining companies to play their cards in the background to curtail public unrest spreading rapidly across the state of Goa. Popular slogan of protest exposes very clearly the biases involved in ruling coalition: Bamon, Bamonkar and Bamonponn. New coalition is largely looked upon as dictatorship of Bamons in Goa.

Vijay Sardessai has outsmarted Manohar Parrikar in U-turn potitics as GF leader. After spitting venom on BJP Vjay opted to call Manohar Parrikar to Goa as Chief Minister and was sworn-in on March 14, 2017. Govind Gawde, an Independent defeated MGP leader Dhavlikar and inducted into cabinet to rule. Saligao and Siolim candidates were elected as GF candidates on clear mandate to oppose BJP, has cause terrible betrayal of voters and generated waves of unrest. Waves now threatening to reach far and wide and may anytime grow into a tornado.

Rohan Khaunte got elected from Porvorim as Independent with support of Congress Party and then changed his mind to support BJP. Churchill Alemao the sole NCP candidate too has reportedly decided to support BJP. Surprising? Sanguem Independent who won the elections Prasad Gaonkar, ST defeated both Congress and BJP has betrayed his electorate and without consulting his voters issued letter of support to BJP making mockery of his victory signaling huge intellectual bankruptcy.

BJP was on rampage looting Goa. Perhaps even more smartly than Congress looted Goa before them and lost major part of its cabinet including CM Laxmikant Parsekar and second in command Rajendra Arlekar both in Pernem. Pernem people has done commanding job revolting against both the sitting MLAs of BJP.

Sudin Dhavlikar of MGP who was aspiring to be Chief Minister was left with just three seats and was left to play gamble with Manohar Parrikar. For the first time Goa Assembly after issuing license to seven casinos in Mandovi itself resembles Casino with massive unethical practices.

At the core of issue - as in Siolim constituency where Vinod Palyekar was elected to oppose BJP -can elected representative resort to unethical practices by resorting to policies completely opposite to what was promised? Surely in Siolim people elected Palyekar not only to defeat sitting MLA Mandrekar but also to defeat BJP in the State of Goa. Can Palyekar take his own decision and embarce BJP ? He cannot. What he and his two colleagues in GF Jayesh Salgaonkar in Saligao and Vijay Sardessai in Fatorda has done is completely unethical and shameful.

For the first time betrayal of Public is creating waves of unrest and this can lead to far reaching consequences not only for elected candidates but for the future of democracy itself. The way three Bamons (Sudin Dhavlikar, Manohar Parrikar and Vijay Sardessai) have collaborated is not just get themselves and their parties in power but also ushered in death of Democracy. The way Governor acted and Constitution of India was interpreted has left general public of Goa dump struck.

There is certain hesitancy on part of BJP to sit in the opposition. It has tasted power for past years and now addicted to power. Its worth remembering what Lord Atkin said more than hundred years ago "Power corrupts and absolute power corrupt absolutely." Now BJP even though voted out of power reducing their seats from 21 to 13 still want to hang on. Why? Addiction to power!

If GF, Independents, BJP, MGP does not give up their greed for power and persists in continuing in power then it can safely be construed as coup d’état against the People of Goa and ushering in the reign of oppression and Bamani tyranny. It must be remembered that in the face of oppression rebellion is a duty. Bharat Mukti Morcha considers ongoing developments in Goa Politics as struggle against Bamon Raj and needs to be destroyed completely with Public as subject of history. Politicians must not be allowed to kick around People of Goa as they have done ever since declaration of results on March 11, 2017 violating electoral commitments in position and ideology.

There is no truth in this government. High Manipulation, fraudulent, no trust, no faith, no abiding in Cosntinutional norms, BJP does what they want.We people of Goa as Goenkars must be smart at least now and voice out; when required action is vital.

Our Constituion gives us freedom of Speech and expression. So all of us must express our views especially about this BJP government. Let us not be chamchas of BJP. We must speak up. It is important and very crucial.

The way representative democracy has unfolded is terrible. Its perhaps time for direct democracy to usher in. 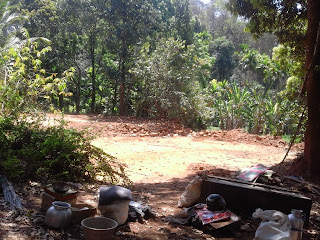 The State of Goa's Indigenous People, Gawdas can be gauged from the renew assault on from State Administration. The latest incident has come from Colomba, Rivona village in Sanguem Taluka on February 27, 2017. According to the reports flowing in officials from Mamlatdar's office in Sanguem went to Dayanand Gaonkar's house with three Pock-line machine declaring that his house is illegal and decided so by some case which we do not know as yet. Cruel demolition this time is not of any non-Goan by of indigenous people from Goa, the tribal family.

Dayanand died few years ago while his wife and son survives and witnessed the roof over their shelter being torn down by the State Government machinery.  According to villagers around mining company is behind this demolition as it is trying get control over land for the purpose of mining. This village of Colomba has history of protest against mining and repression from the State administration protecting mining interests of Fomentos since 2007. The house selected for demolition this time was reportedly existed for past several decades in survey no. 49/1 of Colomba in Rivona village of Sanguem Taluka. Gaukar's family widow Kesar and her son are forced to live without house in open under the Jack-fruit tree close by.

Six years back when Supreme Court ordered portion of Cidade de Goa Five Star hotel near Dona Paula to be demolished Timblo family who also owns Fomento mining company got then Congress Government headed by Digambar Kamat to change laws through ordinance followed by passing in the Legislative Assembly when BJP's Manohar Parrikar was the leader of the opposition. How come house belonged to Gawdas are demolished while 5 star hotel belonging to Bamon is protected through extreme steps? What is operating in Goa is Dictatorship of Bamons and Bharat Mukti Morcha strongly condemns the spirit of racism operating in Goa's administration as well as Political system.

Irrespective of what the legal status of Gaonkar's status it is complete violation of Human right to demolish their house and to leave them to fend for themselves and now one week has completed. This is one more remainder that Goa's Indigenous People are  subjected to oppression.

The demolition of Gaonkar's house in the manner it was carried on raises question whether Goa's indigenous people are slaves and freedom of Goa as well as freedom of India is a myth than reality. What are the causes that has led to this state of affairs? 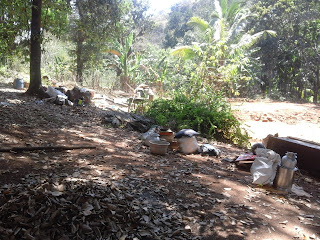 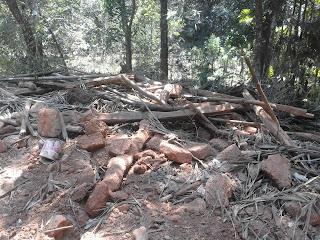 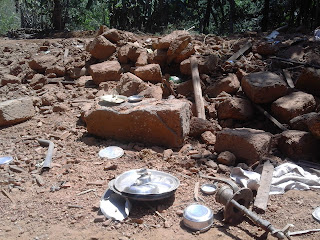 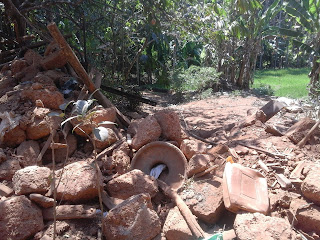 Posted by Bharat Mukti Morcha at 04:45 No comments:

We here present to you date-wise fishing rights violations in River Zuari. Your urgent attention and action is needed

You may note that the Earth Charter
(http://earthcharter.org/invent/images/uploads/echarter_english.pdf)  in its Principle 15 (C) reads as follows “Avoid or eliminate to the full extent possible the taking or destruction of non-targeted species.”
You may be aware that per seine and mini-per seine nets is all about destruction of non targeting species. Fisheries department has not taken any steps to defend the eco system of Zuari river and allowed mini-per seine boats and trawlers to go on a rampage with their nets of even less than 5 mm in size that catches tiny fish that is either discarded or sold as fertilizer. This is gross insult to fish eating people in Goa and body blow to the eco system of Zuari river.
We call upon you to act on two grounds:

Your prompt will be highly appreciated.

Posted by Bharat Mukti Morcha at 03:05 No comments: