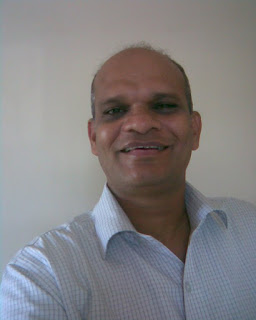 While many in Goa jumped in the wells to celebrate Sao Joao on 24th June 2015, at Goa Medical College life jumped out of Br.Philip Neri De Souza. Life stayed with him for 55 years and helped him to live it to the fullest. Life stays with all of us Humans, animals, plants, insects and even in tiny organism. Life takes many shapes and it took a remarkable shape in Br.Philpi Neri De Souza. Life in him dedicated for the defense of life in varied shapes. Life taught him the art of combating enemies of life represented in such a magnanimous manner in Goa brutally siphoning liquid of life – water. 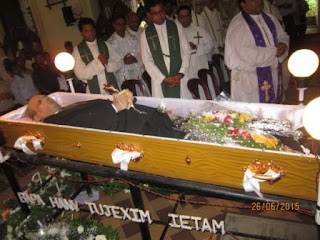 Br.Philip as he was popularly known has many trails left us to ponder. His childhood in Velsao in Murmagoa, His work experience as an mechanic in Bombay, His journey to priesthood in various parts of India, his failure to complete his studies for priesthood due to lack of interest in academic studies, His dogged determination to continue with Selesians as a brother, His journey to his home state and posting at Sulcorna, His exposure to relationship of exploitation of tribal people by Bamons that led him to speak out directly and adivise tribal people on several occasions “Never trust Bamons”, His face to face daily confrontation with Goa’s mighty mining industry that represented enemy of life to him and many, While confronting mining he confronted most powerful lobbies that were determined to end life systems in Goa, His decisions to get highest constitutional authority in the State of Goa Governor S.C 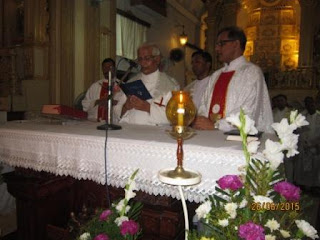 Velsao Parish Priest in the middle performing funeral rites. One next to him visible in red vestments is Fr.Ian Figueredo who in his funeral homily called Br.Philip a 'Revolutionary' that challenged civil as well as ecclesiastical authorities over damage the mining industry is continuously caused to the State of Goa and tribal people. 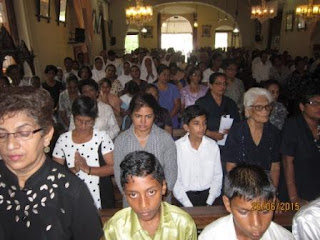 Family, friends, relatives at the funeral mass in Velsao. Also seen is Maggie Silveira, Goa State President of Bharat Mukti Morcha whom some months before his death Br.Philip asked specially to pray for him. 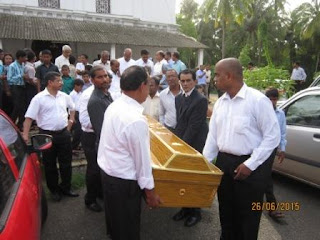 Telu Dias from Colomba recalling moments with Br.Philip. Telu is in black shirt holding coffin in the middle. 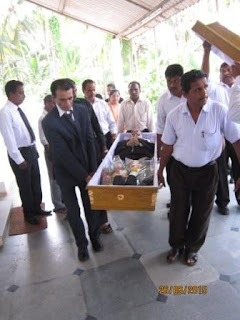 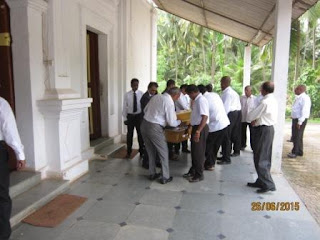 Rama Velip looks on: Just few weeks before his death Br. Philip went to Colamb Sanguem and shared his last solidarity with people. He stayed three days at the residence of Rama Velip.

Jamir to walk with fellow tribals in Rivona, His struggle filled life in Assam, his struggle with his non-cooperative health needing change in blood every month and his ability to simultaneously follow mining affairs and intervene before authorities and advocate curbs on mining. His was a remarkable life, life full of commitment to justice, life and dedicated combat that did spare even his Selesian colleagues at time. He never compromised his principles and was ever willing to pay a price whatever it may take. While we are sad for Br.Philip’s death we take up the baton from where he left in the relay of life and carry it ahead, for we are sure that’s what would satisfy him in heavenly abode. Never to let sadness of his death be an overarching obstacle for his baton to lift and step ahead.

Few of us, in fact very few of us had a privilege of associating with Br.Philip very closely and here we lay out some of his most remarkable feature of working in risk filled mining belt of Goa. The risk to his life was real and he faced it with everyday. The intensity of risk was very high in 2001 to 2006 because his was most powerful voice in the wilderness, in defense of life treasured in wilderness. And mining industry and the State administration was filling the impact of his presence Sulcorna.

1.  Put in writing: The base of his effectiveness was in his highly prompt drafting of letter and submitting to the authorities. He filed letter in his personal capacity as well as helped with his drafts to other people of Sulcorna and neighboring villages such as Rivona, Colomba, Cavrem, Muscavrem, Cajur etc. Amount of letters he helped in writing is mind-boggling.
2.  Stay way from publicity: Even though not always but he most of his life stayed away from press publicity. He instead allowed tribal people to speak to media on first hand accounts of ground reality due to mining on agriculture, rivers, water table etc.
3.  Represent before State Authorities: This was truly remarkable feature of him that led him to present himself and speak always in defense of tribal people and against mining. His commitment led in speaking out boldly at several Public Hearings organized by Goa State Pollution Control Board on behalf of Union Ministry of Environment and Forest especially in South Goa. This got him on record before the government authorities. This he did even though it was not always easy for him in the face of loud jeers and from the unruly crowd gathered on such occasions by mining companies.
4.  Work in secrecy: This was his trademark of functioning. Possibly he developed this way of working in the face of huge threats to his life from mining industry. He practices secrecy at several levels. The most base level of secrecy was never to take anyone from his struggle to his house in Velsao and not even disclose as to where his house was located. In fact may of us his close collaborators for a decade came to know about his house and village one day after his death. He rarely shared his mobile number and rarely disclosed he where about correctly over the mobile phone. Possibly he did this as measure of precaution.
5.  Determined fighter: One Sunday group of villagers from Rivona came over to Panjim police headquarters to give entry on some urgent letter to IGP on police atrocities in mining belt. Villagers found office closed and were wandering what to do. It was 6.30 pm at that time. Suddenly they found Br.Philip around and when came to know about the problem villagers were facing he single handedly started a fight with Panjim police headquarters. He argued “police station has to remain open for 24 hours to receive entries and since villagers has travel over such a long distance and matter is so urgent about police atrocities on people opposed to mining their they cannot be sent back saying come tomorrow. This is unacceptable!” He succeeded in convincing the police authorities and villagers led by Rama Velip got the entry done and letter stamped from the back door of the Police headquarters.
6.  Exposure trips to Pissurlem: He succeeded not only inviting people from various parts of India to witness injustice in South Goa’s mining belt but also took buses of people from Rivona on site exposure trips to Pissurlem in Sattari that has witnessed mining for over half a century. This was done in order to help people visualize as to what can happen to their own villages if the mining is allowed to dig to extract iron ore and manganese. 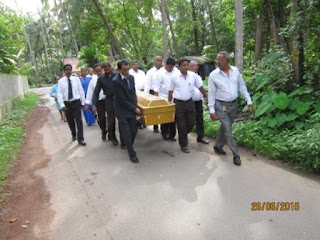 ‘When world closes the door God opens widow’
One of the favorite sayings that he held dear in the face of adversaries is ‘When the world closes the door on you, God opens window’. World had shut doors on him several times pushing Br.Philip through very painful experiences that piled up on him. Once tensions arrived in his own Selesian society local enterprise leadership in Sulcorna cracked down on him in a bid to curtail his anti-establish activities. Br.Philip used to invite few people to provide publicity to media surpressed reality of mining activities in the state of Goa. Sebastian Rodrigues from Siolim and late Mathew Pereira from Colvale used to stay at Don Bosco Society premises in Sulcorna. Once the crackdown came about Sebastian was told by Br.Philip to stay in the houses in Rivona amongst tribal community. This was done and the contacts with people were established and this proved important asset after Br.Philip was transferred away from Sulcorna into Assam and prior to that when he went missing as per his photographs at various police stations notice boards in Goa. The door was shut on him and God showed him the widow and he followed his calling.

‘I am little mouse, I cannot bring the mountain down but can create little holes all over mountain’
This was another of his philosophical base on which he operated to mount attack on mining industry. He never organized massive morchas, hunger strikes, dharnas or protest rallies. He saw mining as formidable enemy and was committed to its downfall for he found no merit in its continuation due to its demonic nature of destruction of mountains and export of ore and large scale irreversible damage to rivers, forest, paddy fields and few mining companies amassing great fortunes. Br.Philip had a vision that every word he spoke, every petition he drafted he visualized digging a hole through mining industry. How correct and practical he was!

Combating self destruction of Goa
Br.Philip personally witnessed by driving in dusty rusty surroundings in and around surrounding great momentum of self destruction of State of Goa though open cast iron ore mining. He witnessed Dinar Tarcar’s mining in Sulcorna digging the lush green Western Ghats mountain that was picnickers’ delight just vanish from the map of Goa. State machinery was committed to finish up the State of Goa as still is. Congress or BJP or MGP or GVP or Independents does not matter. All the current MLAs of Goa stood in one voice defending mining. Only conclusion that can be derived from this is that mining companies has funded every party in Goa and every MLA in Goa. Self-destruction is foremost feature of demonic State. As a priest Br.Philip fought it unceasingly. He dug holes to the State and made it porous. His strategic whirlwind against mining inspired many to admire and understand the mining issue. His efforts laid foundation to what is to come in the years to come and get mining industry to stop demonic practice of self destruction of Goa though State machinery.

Br.Philip joins the ranks of the priest with exemplary service to society in Goa Pe. Chico Monteiro who suffered imprisonment in Patiala jail throughout the decade of 1960s and Fr. Joaquim Fernandes while posted at Curpewadao Chapel, Cortalim who pioneered work amongst tribal people of Goa after his exposure to Apartheid in South Africa. Both the priests were suppressed while also by the Church Hierarchy in Goa besides the State, and forgotten after their death. Former Archbishop of Chiapas, Mexico late Bartolomeo del las Casas too stood up for the rights of the tribal people trampled by Spanish Conquistadors in. Br.Philip Neri de Souza's contribution to humanity is no less in any measure even though many would be allergic to admit the same.


Br.Philip however was not a diocesan priest and it remains to be seen as to how Society of Don Bosco carries ahead his legacy ahead specially in the times when the mining industry that Br.Philip fought is raising its head back again to continue its agenda of dismembering Goa and its people forever. It is but assured that Br.Philip has already moved in spirit and continue to inspire us  and interceding for many closer to the cause dear to his heart. In life there was restrictions on his capabilities now in death all restrictions on him vanishes and withers away. Our tears sprouts out wings to transcend transcend tragedy and hammering our piercing political strategy that engaged in constantly. We too throw our fears to the winds and gather our courage to combine with collective wisdom to move ahead one step at a time, one day at a time.