Vanxim land scam has grabbed major attention of the office of the Goa Archbishop in Goa. After reckless collusion of land mafia the Archdiocese of Goa though the office of the Archbishop has gone about convincing the public that its secretive deal on Vanxim beginning from 1992 was correct. This statement published in official church bulletin "Renevacao" of January 16-31, 2016 is rather surprising considering that Archbishop Ferrao himself has declared that Vanxim sale deed is morally wrong. In spite of lengthy statement the names of those who signed Tenants Association of Vanxim N.O.C dated 26/02/1996 still remains undisclosed.

Office of the Goa Archbishop after tolerating eco-terrorist attacks on bunds of vanxim and flooding of paddy fields now wants to ascertain view of Vanxim villagers on the genuine development of Vanxim and how many are willing to cultivate paddy fields. This means if the Vanxim people are willing to cultivate the Paddy fields office of the archbishop will support them even though rice fields are sold twice already; first by Archbishop on February 11, 2006 to Mahendra Gaunekar and next by Mahendra Gaunekar to Ozone Leisure and Resorts Pvt Ltd from Bangalore on August 05, 2015. By the way why entire people of Goa were not consulted before selling Vanxim?

This issue of the newsletter has cover page depicting Santus Cristus Church in Vanxim and google map of Vanxim used for promotional purposes by Ozone Leisure and Resorts Pvt Ltd. The satellite image of Vanxim was published online advertising sale of luxury villas in Vanxim at the rate of Rs 40 crore each. The links was as follows : http://googleweblight.com/?lite_url=http://zoperty.com/properties/ultra-luxury-bungalows-ozone-vanxim-island-goa-ultra-luxury-bungalows-villas-zoperty-40-crores-onwards/&ei=ML-QbA8i&lc=en-IN&s=1&m=130&host=www.google.co.in&ts=1465957985&sig=APY536yK8KFlIG_FlD18bjJCXGG8-dQvtA

However after the links began to be viewed by people of Vanxim and details of loans advanced to Ozone from various banks became known the advertisement was quickly withdrawn in May 2016.

This picture of Vanxim shown luxury villas in Vanxim. What's the aim and what's the game of this advertisement on cover page? Office of the Archbishop got to answer.

There is no explanation of cover page by the editors and editorial team of Renevacao. Its editor is Fr. Francisco Caldeira and Editorial board consists of Fr. Olavo Caiado, Adv. Dr. F. Edgar Noronha and Mrs. Maria Helena Souza.

We however agree with the quote from Laudato Si' 219 that reads on index page "Social problems must be addressed by community networks and not simply by the sum of individual good deeds." This is the reason this is put up here for networks to debate and act. Yes, this posting is an invitation to participate in this debate and act. This is the way we could contribute to rescue not only Goa and Vanxim from the Bamani clutches but also rescue the office of the Archbishop itself. Its aims and games are contrary to Gospel as well as contrary to Christian stewardship and on selling spree. This trends must be arrested immediately. 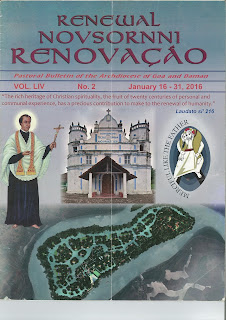 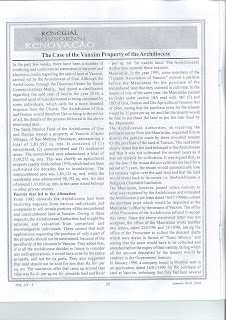 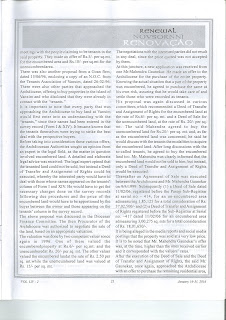 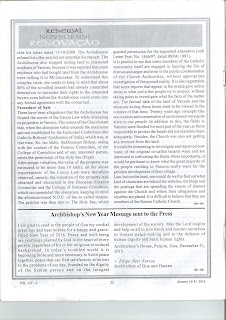 Posted by Bharat Mukti Morcha at 06:43