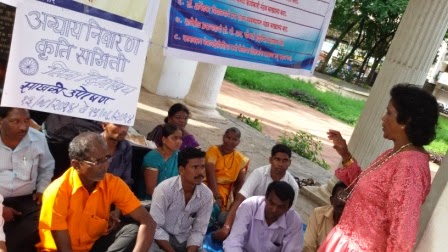 On13 august 2014 the first day of the chain agitation or the sakhali uposhan was held at azad maidan, Panjim. The uposhan time was from 10am to 5 pm. 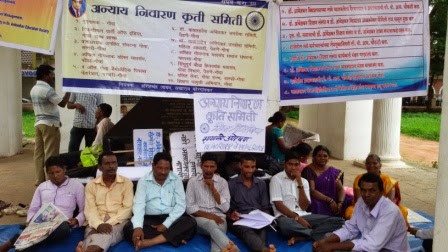 The uposhan started at 10 am The members of the schedule caste community along with the members of Anaya nirvana kruthi samaiti taking a bigger step against the government for not looking into the issue of corruption and ill legal things happening in the Dr.Baba saheb Ambedkar high school Cuchalim, Bardez, Goa. This chain agitation is carried out due to negligence of the government towards this big issue. 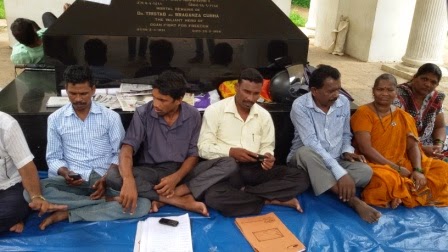 The chain agitation will be from 13th August to 15 august and it may be continued further till the government look  into the matter with a proper solution. From 10 am to 5 pm all the members of the schedule caste community were waiting for the chief minister to visit them  for atleast 5 to 10 minutes but same as last time (30th July 2014). 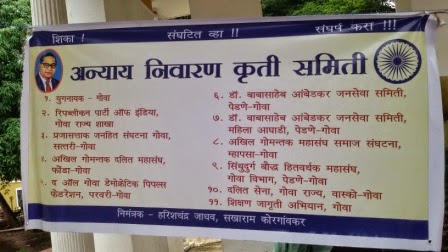 The press played a very important role in this issue, they are along with the samiti from day one of the formation of the samiti and till date they are along with the samiti. The press named  Prudent media, hcn, video volunteers, tarun bharat, gomantak, gomantak times visited the spot on 13 August 2014. The response of the press was too good towards this serious issue. They highlighted all the demands of samaiti and brought it to the notice of all the people of Goa and schedule caste community who were not aware of real fact that was going on in the said school and how Akhargekar in the name of Baba Saheb utilizing the money for his personal need. 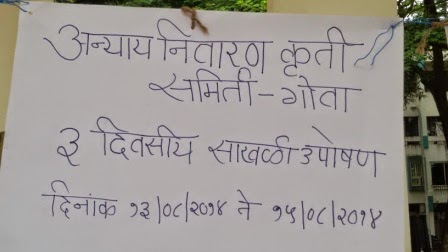 This first day shows that no one is interested in solving the problems of the schedule caste community and the minority.  Nor the chief minister nor the members of the legislative assembly. The only demand is to have a C.B.I inquiry against N.G.Akhagerkar and the management of the school.and followed by all other demands.
The demands of the samiti were highlighted by the press few days back in the news paper but again to remind you all the demands of the samiti they are as follows.
THE DEMANDS
1. Immediately initiate C.B.I inquiry in to the sources of money availed for the construction of school building.
2. Stop corrupt practices in Dr . Ambedkar English High School. Kuchalim.
3. Handover the school and the educational society to the SC community.
4. Initiate C.B.I inquiry of employees recruitment process by Akhargekar and school management.
5. Immediately dissolve corrupt Executive body of Dr.Babasaheb Ambedkar Education society.
6. Immediately dissolve the corrupt and bias school management.
7. Immediately appoint administrator on school management.
8. Put an end to the monopoly of Akhargekar family over school management and Dr. Babasaheb Ambedkar education society.
9. Revoke illegal termination order of teacher.
10. Initiate C.B.I inquiry into movable and immovable property of Akhargekar in Goa, Poona and else where.

Our request to the government to have a C.B.I inquiry of all the demands. The first day chain agitation or sakhali uposhan ended at 5 pm. Again to remind you all that the chain agitation will continue till 15 august 2014. And if necessary it will continue further and it might become aggressive or may lead to hunger strike if government doesn't take immediate steps over this issue.


The media and the press visited the spot, they ask many questions and members replied to the questions, by saying have a C.B.I inquiry into this matter. While speaking to the media one of the member named Namdev Dhargalkar said that this agitation will continue also on 15 august. 15 august were the nation will enjoy the taste of happiness and joy of freedom but the schedule caste community sitting here on chain agitation on 15 august is a shameful activity for the government of the this state.


The same thing happened on 15 august nobody was interested in tackling the problems faced by this community and society at large. The chain agitation continued till 5 pm.and through this it is clear that the government is not interested in solving the problems of the S.C community and its also clear that this  government is not capable to run the government and the state because if you are not capable of solving people's grivences then why we need such government.

The struggle is not stopped here, the one day struggle ( dharna)  let to 3 days chain agitation ( sakhali uposhan) now sakhali uposhan will led to big and large protest against the government for not looking into the matter and the demands of the samiti.

Email ThisBlogThis!Share to TwitterShare to FacebookShare to Pinterest
Labels: Education