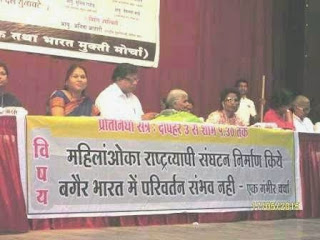 The text of Goa State Bharat Mukti Morcha President Maggie Silveira’s speech at 3rd Annual conference of Rashtriya Mulnivasi Mahila Sangh held at Swargate, Pune on 17th May 2015. This is an English translation of original speech in Hindi addressing over 6,000 delegates from various parts of India. 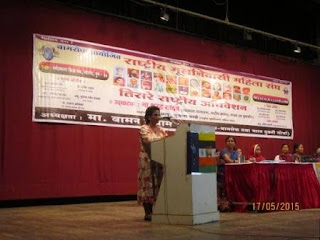 Today’s topic “Without creating nation-wide women’s organization transformation is impossible in India: a serious discussion”. I have a question to every man who is present here: have each man who is sitting here in this auditorium, have they come with their wives, sisters, daughters? If yes, then it is very good, excellent. If no, it is very bad and very sad. Freedom does not come for free; we have to pay the price. That is why it is very important to set the women free. In this country Varna system and Jati system is developed by making women as its base and for its development, women are used as an asset and after using women in this way a strong Bamani system is founded. It is not possible to end that system personally. To end this there is need to generate an organized force. This will be possible by forming an organization. Only then big transformation is possible. That’s why this subject is placed for discussion.

Its our responsibility to involve in freedom movement, all the women has to be set free as all the women has right to be free. To attain such freedom we have to fight ourselves. Savitribai Phule was well known amongst Britishers for her poetry in English. Savitribai Phule made an opening for education for women. We must all be grateful to Savitribai Phule as it is through her education got imparted to the entire womanhood in India and beyond in spite of strong blocks of Bamons, she excelled and contributed to Jyotibha Phule’s movement and even lead the movement for five years after Jyotibha’s death. That’s why she is honored with title ‘Krantijyoti’.

Eurasian bamons has made mulnivasis slaves. We women are enslaved by these very Eurasian bamons who has not allowed us to move forward in society in India. Now the time has come to know who is our friend, who is our enemy.

Bharat Mukti Morcha is highly advancing in Goa from all fronts. Our freedom struggle, agitation, movement, goes in this following direction.

Our Archbishop of Goa Felipe Neri Ferrao has sold our fields 3,00,275 square meters of land which is a  sold to Mahendra Gaunekar who is also a Bamon like Archbishop Felipe Neri Ferrao for peanuts. All this is in Vanxim island in Tiswadi taluka. Mahendra Gaunkar then sold it to Ozone corporate for crores of rupees. The project that was to come to come up was worth 900 crore include Golf Course, recreational club, private marinas, spas, villas (each villa costing 22 crore), casinos, prostitution, Helipad etc. We went to survey number 8 that is a water bodies with professional cameras and got the report of survey number 8 and filed objections before Chief Town Planner, facilitation centre, Chief Secretary that we object the same.

In Mandovi river there is looming disaster planned again by Bamons is called Pontoon. Now, what is Pontoon? It is floating bridge that is 18 meters long and 10 meters deep. No EIA (Environment Impact Assessment) is carried on. In spite of this permission is given by Captain of Ports and Chairman of Goa Coastal Zone Management Authority. Scientist Antonio Mascarenhas has prepared detail report of how bad this Pontoon and need for full-fledged EIA report. His study observed that this pontoon is going to promote soil erosion and affect nearby residents.  But he has been over ruled and permission granted, and asked to plant 200 mangrove saplings.

Five villages Cacra, Nauxim, Siridao, Odxel, Bambolim, most of them fishermen; there is illegal fishing activities going on as trawlers come regularly. 30 trawlers, 28 trawlers, 25 trawlers, 20 trawlers, 19 trawlers, 15 trawlers, 10 trawlers, 5 trawlers, 3 trawlers were coming on everyday basis and troubling the traditional fishermen cutting off their nets which then needs repairs. Main grievance with trawling is that it destroys marine ecology by dragging the riverbed and in fact it is banned in rivers and even  in sea within 5 kms zone.  Having met the director Sharmila Monteiro on couple of occasions followed b y secretary fisheries Amjat Tak IAS we managed to stop these trawlers to a great extend. Director of fisheries Sharmila Monteirao is continuously supporting the trawlers in spite of Bharat Mukti Morcha’s strong intervention. We condemn Director of Fisheries Sharmila Monteiro for supporting the trawlers and indulging in mismanagement of fisheries causing harm to the traditional fishermen through promotion of compromises.

Hotel Grand Hyatt is involved in promoting water sports in Zuari river where traditional fishermen do fishing. Hotel’s Water sports boats including those of aqua sail are regular irritating nuisance to local fishermen. Aqua sail sometimes operate their motored boats in their own uniforms while after complaints from Bharat Mukti Morcha they are operating in plain clothes. In both cases it is illegal. Yet Director of Fisheries Sharmila Monteiro tells us that they are not the same people even though we have photographic  evidence to prove that they are the same people in plain clothes. Again we condemn Sharmila Monteiro along with Hotel Grand Hyatt, their nexus.

On May 07, 2015 Fisher people along Vasco bay at Kharewada abandoned by all the political parties joined Bharat Mukti Morcha. Murmagao Port Trust (MPT) in order to expand is involved in series of demolitions of houses of coastal dwellers including of traditional fishermen. Bharat Mukti has objected in writing to MPT plans of conquest and war on all the coastal dwellers fishermen and others in Baina, Kharewada, Desterro, etc.

Bharat Mukti Morcha is also involved in protests against Marinas at Bambolim and Sancoale promoted by MPT. Marinas are dockyards for hundreds of luxury Yachts of super rich people from all over the world on visit to Goa. Marinas has threatened to put full stop to fishing activities in Zuari River thereby putting large number of fishermen out of livelihood. This is form of river grab just like land grab in Mopa, Pernem taluka of Goa for Greenfield international airport.

All these projects of displacement camouflaged as development are master minds of Bamons and executed with political parties that are impotent to defend mulnivasi interests of land and river, housing and agriculture. They no longer defend public interest.

On October 29, 2011 Hon.Waman Meshram inaugurated blog of Bharat Mukti Morcha www.bharatmukti.blogspot.in and so far it has crossed 46,000 hits. This blog in English has detail information on advancement of Bharat Mukti Morcha in Goa. This blog id must be published in Mulnivasinayak so that mulnivasi people reading the newspaper are kept updated on Goa situation and our work in Goa.