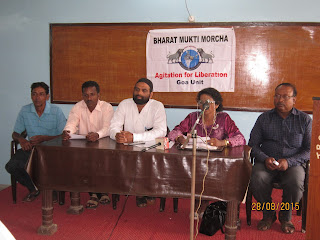 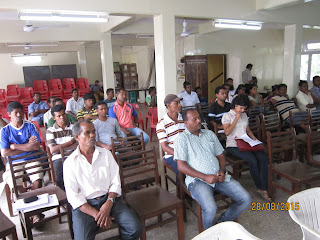 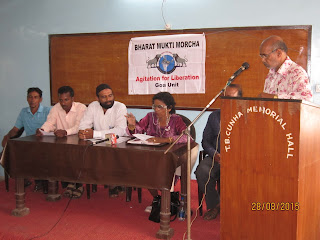 Anthony Veronica Fernandes, founder of Kuwait Goans Solidarity Centre addressing the public meeting. He shared his experience as to how Philippine women were made to bear illegitimate children at a time when it was R-N-R destination to US soldiers. 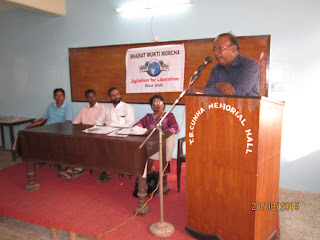 
Bharat Mukti Morcha strongly objects to the recent statements of Union Minister of Shipping Nitin Gadkari about installing Marinas in Zuari river. Mr.Gadkari’s statements has been completely irresponsible considering that there has been wide opposition to marina projects in Zuari river ever since they were conceived through two Lease deeds of 12 October 2010 with Kargwal Constructions pvt Ltd and 14 October 2010 with Yatch Heaven Pvt Ltd. There have been consorted efforts made by Union Government to deprive local communities of fishing spaces in Zuari river. In both the Lease deeds there is special provision that favors zero obstruction of mining barge transport by Marinas. It states “The LESSEE shall take all precautions to ensure that barge movements are not affected during the construction as well as operation period of the Marina”. What is noteworthy is that such a provision does not exist for fishermen in Lease deed documents. Why this discrimination? The statements made by Mr.Gadkari does not have basis and he has made no estimates as to what it might mean if fishing spaces in Zuari River is lost. What is most insulting is that in face of overwhelming opposition from public of Chicalim, Nauxim, Cacra, Odxel and Goa Velha, Ministers like Alina Saldanha legislators like Vishnu S. N. Wagh, Panchayats of Sancoale, Cortalim, Agacaim, Siridao, Bambolim, Zilla Parishad of South Goa, Fishermen’s organisations like  Goenchea Raponkarancho Ekvott (GRE) and Bharat Mutki Morcha; Mr.Gadkari went on insisting on Marinas in Zuari River.

Bharat Mukti Morcha calls for revocation of notification issued by Central Government on 24th May 2000 extending jurisdiction of MPT over Zuari river. There are already number of problems in Vasco where MPT has jurisdiction and protests from fisher people opposing use of Vasco Bay for MPT projects and expansion plans. In this background Mr.Gadkari has announced that number of MPT berths is to be increased from 14 to 18. This means further displacement of local people. MPT has already caused social danger by announcing their plans of developing Goa into Rest and Recreation (R-n-R) destination. This involves accepting of foreign ships of soldiers fighting in different countries like Americans in Philipines in the past. This will only institutionalize Prostitution in Goa.

Bharat Mukti Morcha foresee that announced 50% subsidy for floating jetties will facilitate projects opposed by public specially at Divar of Champions group that is already carrying Gadkari’s photograph on their website, and Ozone group’s floating Jetty at Old Goa to ferry tourists to Vanxim island in Mandovi. Vanxim Island has faced strong public protests for past half a decade. Bharat Mukti Morcha extends support to all the people, groups, etc who are opposing irrational development policies sought to be developed by Goa Government as well as by Government of India.
Posted by Bharat Mukti Morcha at 00:51